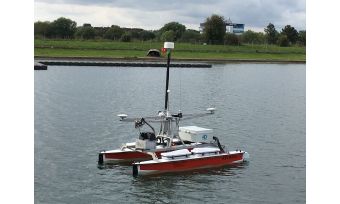 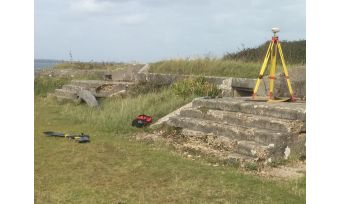 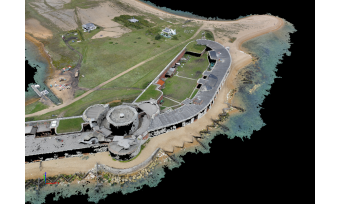 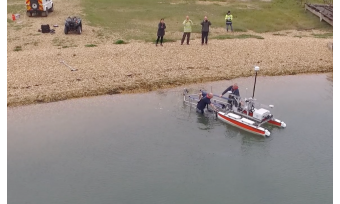 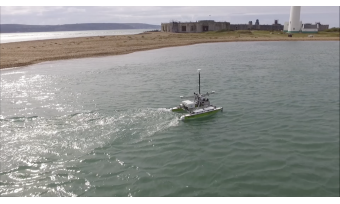 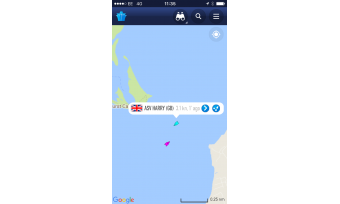 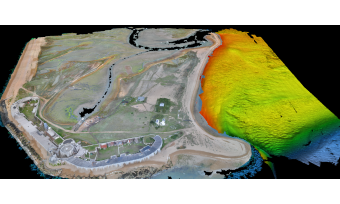 During September 2017, the world’s first autonomous hydrographic survey was performed. 'Autonomous' means not by remote control, but rather that the autonomous surface vehicle (ASV) used guidance from survey software to run pre-planned survey lines or automatically generated lines based on sonar coverage, with human interaction possible but not required. The Channel Coastal Observatory (CCO) commissioned 4D Ocean to undertake a hydrographic survey of the seabed offshore of Hurst Spit, Western Solent, using a SeaRobotics ASV 2.5. The pilot survey was supported by the Maritime & Coastguard Agency (MCA) and UK Hydrographic Office (UKHO).

The seabed offshore of Hurst Spit, Western Solent, was chosen as the survey site as it is subject to a challenging wave climate and strong tidal currents and has not previously been surveyed by multibeam. Furthermore, Hurst Spit is an important natural barrier beach that requires monitoring to manage and reduce erosion and flood risk.

CCO maintain and store the coastal survey data around England. The aim with their surveys is to link the topographic and hydrographic surveys together so that highly accurate coastal engineering decisions can be made from the data and that successive surveys can be assessed to look at temporal variations. Support for the trial was also provided by the Maritime & Coastguard Agency, which funds, manages and delivers the UK Civil Hydrography Programme, a programme that prioritises survey and mapping of UK Home Waters, to provide high-quality hydrographic data that underpin the production of national nautical charts and publications, and to maximise the benefit to maritime safety, the marine environment and efficient maritime transport.

Preparation for an Autonomous Surface Vessel (ASV) survey is a little different to conventional hydrographic surveys. It is always a good idea, regardless of the type of survey, to get as much prior information as possible as to the tides, currents, shoals, shoreline type and foreshore conditions, potential or actual obstructions, etc. but in the case of an ASV this is critical. Google Earth, though excellent, does not have the resolution required to discern obstructions and there is no information as to the state of the tide when it was surveyed. ASVs have a survey speed of approximately 4 knots and not a great deal of extra thrust when deployed with survey equipment, therefore timing survey operations around tidal currents are essential.

The survey methodology that 4D Ocean employed was two-fold. Survey at low water with an Unmanned Aerial Vehicle (UAV) and then survey at high water with the ASV. This has a number of advantages. The UAV survey collects high resolution topographic data which though not normally a hydrographic deliverable is highly accurate data that is very useful to coastal engineers. It is also timely so will match with the ASV data. Flying the UAV at low water means that the resulting aerial orthophoto can be analysed for obstructions and used as the shoreline edge of the survey for the ASV to run along.

4D Ocean used the following equipment for the survey:

The UAV survey was performed over low water springs. As Hurst Spit is a strategically important site at the entrance to the Western Solent, the CCO monitor the barrier beach closely. CCO already have geodetic control points and one of these was chosen as a quality control point for the RTK GNSS observations. Ground Control Points (GCPs) were then established using both man-made and natural features.

The senseFly eBee Plus UAV is fully autonomous. A survey plan is created based on the survey area polygon, the survey resolution required and the wind direction. The UAV also doesn’t need GCPs to process the data as RTK GNSS corrections are transmitted to the UAV in real-time via the radio link so each photo is geotagged to approximately 2cm resolution. However, a further quality control was undertaken where the GCPs in the processed data were identified and compared to the GNSS processed GCP positions calculated by the Pix4D processing software. The horizontal positions of the GCPs matched almost exactly, and the vertical accuracy was within 10cm. Post-survey, the data is being GNSS PPK processed to compare a single base station location to the virtual reference position used in real-time. The final difference results will be shown at the conference.

An unknown bonus was that the photogrammetric processing actually created accurate points under the water to a depth of approximately 1m. This was beneficial for comparing the overlap between the UAV and ASV surveys and also for informing future survey planning in less shallow water areas that need to be surveyed by the ASV, improving efficiency further.

An ASV has a maximum speed of approximately 6 knots with the sonar deployed so tidal currents need to be carefully planned around to ensure optimal speeds. At Hurst Spit the maximum current over Spring tides is about 6 knots, therefore the planning had to be performed very carefully. It isn’t just the speed either, at 90% thrust the battery power is going to be depleted much more quickly so, for efficient survey operations, 60-70% power is optimal. It was established that during the 2 hours before low and high water it was possible to survey in the areas where the currents were strongest and for the other times we could survey either along the Spit or round in the Haven. This was also weather dependent, like any survey, as the Spit is exposed to Southwesterly, westerly or easterly winds.

The SeaRobotics ASV 2.5 is a great size for portability fitting into a box trailer which can be pulled by a normal 4x4. Small roads and remote places are not an issue. One of the many advantages of an ASV is that you don’t need to launch the ASV in a port. Providing you can easily access the water you can launch from anywhere. During the UAV survey, a sheltered location was selected at the end of the Spit. The Spit is formed of loose shingle so the main road-worthy trailer couldn’t be used. However, the ASV has its launch trailer, which is designed on a jet ski trailer, and this was towed to the launch site by the CCO 4x4. The communication computer and Wi-Fi were run on their internal battery during launch and recovery so that the remote control used for the initial and final movements of a mission, could be near the ASV launch and recovery location. Once launched the ASV is put into station keeping mode while the shore station is set-up for the survey.

The ASV can either be given a line plan, which it then executes or (and what was used for this survey) the next survey line can be automatically calculated by Hypack, based on the actual sonar coverage in real-time, and including an overlap percentage. Once the line is completed the next line is generated and the guidance information fed by the autopilot driver to the ASV control software. The ASV’s line keeping capability was well demonstrated, generally not deviating more than 0.2m from the survey line. As the ASV progressed the next line was then computed and at the end of the survey line a new line was calculated. There were only very occasional issues with gaps in the coverage and this was more based on manually selecting the appropriate degree of thrust during line turns (to either be with or against the current) than the autonomous calculation of the actual line itself. Hypack starts and stops logging automatically at the start and end of each line so no input was required from the onshore surveyor.

The ASV is equipped with a sound velocity probe at the transducer, for beam-forming and uniquely, is also equipped with a winch from which an AML Base X SVP probe can either be launched as part of the mission or manually. The commands to launch the probe tell the ASV to either send the probe down a specific distance or to stop a certain distance from the bottom, where it then uses the sonar depth to set the distance to cast. Once the probe has re-docked on the vessel the data is relayed via Wi-Fi.

The R2Sonic 2020 sonar was run in the new Ultra High Definition mode, which produced 1,024 beams in every ping complete with snippets backscatter for each beam. This was coupled to the POSMV Wavemaster which was running the new POS View 5 software which allowed RTK GNSS corrections to be input via online streaming. This negated the need for an extra data radio and the connections and battery usage that would have been necessary.

During the survey, the ASV’s AIS system was running showing all nearby vessels where he was and why he was on the water. CCO’s survey vessel Zephyr provided safety cover but just ended up shadowing the ASV.

Where there were infills to do the ASV came into its own. The infill lines were selected, loaded into their own line plan and then the ASV was tasked with running the line plan. It did this efficiently and effortlessly.

The survey area had been split into 3 blocks with Block 1 being adjacent to and south of the Castle, Block 2 was adjacent to and running westward along the Hurst Spit frontage and Block 3 extended between Castle Point and North Point, on the eastern side of the spit, a patch of shallow seabed not surveyed with multibeam. By the end of the 2nd day survey window, Block 3 had been completed, and due to weather and tidal current conditions, three-quarters of Block 1 and none of Block 2 had been surveyed. Block 1 was affected on day 2 by strong winds as well as spring tides which meant that the ASV (and for that matter any small survey boat) could not survey in that block or Block 2.

Block 3, though shallow, turned out to be very interesting in that the remains of an ancient forest were possibly found. For navigation purposes, the morphology and location of the Spit has changed dramatically since the previous single beam and topographic surveys were conducted so the new extents and depths adjacent to it will be used by UKHO to update the ENC cells and the Admiralty Charts.

The ASV performance was better than anticipated in that the battery life turned out to be approximately 5 hours and that was running at a very high thruster power at times.

The Autoline function in Hypack had a few issues at the start and end of each line in that it tried to write the next line around the edge of the online grid at the end of the line which put a turn in the start of the next line. It was found that occasionally the line had to be manually closed to enable a “straight” next line to be generated. Future developments should also give the ability to generate the next line with the extents defined by a polygon.

The ASV is clearly a cost and time efficient means of undertaking a hydrographic survey. The flexibility and convenience that it brings allows for rapid deployment for a range of survey requirements, from event surveys through to very efficient large coastal surveys.