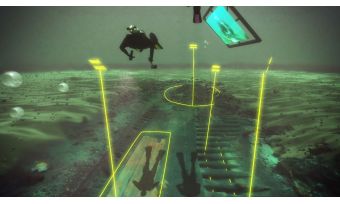 Exactly 360 years to the day since the Dutch merchant ship Melckmeyt (Milkmaid) was wrecked off a remote Icelandic island, experts have harnessed virtual reality to create a virtual dive of the wreck. The Melckmeyt was on a secret trading mission when it sank during a storm. Digital archaeology specialists from Australia’s Flinders University have worked with maritime archaeologists at the University of Iceland to create a 360-degree virtual view of the wreck, which was discovered in 1992.

Caption: A scene from the virtual dive, with divers swimming over the wreck as it appears today, with areas of the wreck labelled in yellow (Image by John McCarthy).

This video was made by John McCarthy. It was created as part of a collaboration with maritime archaeologists and museums in Reykjavik, Iceland to create a virtual reality diving experience, exploring Iceland’s oldest shipwreck. By donning a Virtual Reality headset, members of the public can now experience what a diver sees without getting their feet wet. Visitors can also see how the shipwreck might have looked just after it sank 360 years ago.

The wreck at the centre of the project is a merchant ship named Melckmeyt. It was discovered in 1992 by local divers Erlendur Guðmundsson and Sævar Árnason, close to a tiny isolated island called Flatey in Breiðafjörður, off the west coast of Iceland. A preliminary investigation was carried out in 1993 by archaeologist Bjarni Einarsson on behalf of the National Museum of Iceland. Investigations at the site restarted in 2016, when a team of divers from the University of Iceland decided to carry out a more detailed survey.

This team was led by Kevin Martin, a maritime archaeologist and PhD student in archaeology at the University of Iceland, with the assistance of maritime archaeologists from the Dutch Cultural Heritage Agency who are interested in the ship, as it is believed to have been built in the Netherlands and represents one of the world’s most northerly historic Dutch shipwrecks. The team was able to apply the latest technological innovations to make a high-resolution 3D survey of the shipwreck and this data has been used as the basis of the virtual reality experience.

As the oldest known wreck in this part of the world, it shines a light on a fascinating period of Icelandic history, when Denmark ruled the island and had a monopoly over trade there for a period of 200 years. Visitors to the Reykjavik Maritime Museum can now explore the shipwreck, without submerging into the freezing North Atlantic, by visiting the museum and donning a Virtual Reality headset. (http://borgarsogusafn.is/en/reykjavik).

The highly detailed three-minute animation lets the virtual diver swim over the wreck and, by just moving his head, look around in all directions. This can be viewed directly through the YouTube website, either on a computer or smartphone (by dragging your mouse across the scene or moving the phone to look around) or by using a virtual reality headset such as Google Cardboard or Samsung Gear VR. There is plenty to see, such as the surviving ship timbers on the seabed, a detailed reconstruction of the ship and even a few jellyfish.

This international project is supported by many different agencies. The 2016 survey was funded by Rannis, The Icelandic Centre for Research. Additional funding for dendro-chronological analysis and archival research has been provided by The Cultural Heritage Agency of the Netherlands. The reconstruction of the wreck as it might have appeared after it sank in 1659 is based on a scan of a scale model of the probable same type of ship - a flute - built at around the same time and now stored in the Maritime Museum in Rotterdam. 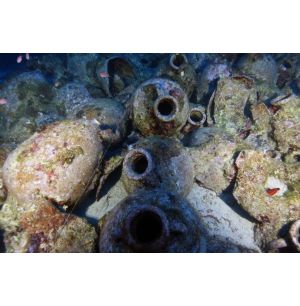