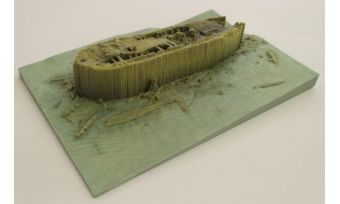 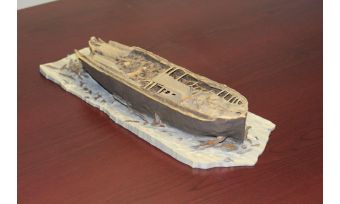 During Ocean Business a 3D-printed model of HMS Erebus will be on display at the CARIS stand, N10. In the past 160-plus years, various expeditions have taken place in the hope of finding Sir John Franklin's lost ships, HMS Erebus and HMS Terror, and learning more about the ill-fated expedition. Using high-resolution multibeam sonar the Canadian Hydrographic Service (CHS) was able to collect a very dense bathymetric dataset of the HMS Erebus in its final resting place on the ocean floor. In addition to contributing to the discovery of HMS Erebus, the data collected in the Arctic will be used to improve navigation as CHS issues updates to charts and publications.

During a search for the ships in 2014 by the Government of Canada and organisations from the public and private sectors, the Prime Minister of Canada announced that one of the two ships, HMS Erebus, was located in Queen Maud Gulf in Canada's Arctic.

Working closely together CHS, CARIS and TECTERRA created the first 3D printed model of the HMS Erebus. The high-precision model was created using CARIS HIPS and SIPS, which can now export to STL format, a common interchange format for 3D printers. On export to STL the user can specify a scale for the model and enter a vertical exaggeration, which can be useful when modelling small features or larger areas.

At a scale of 1:130 the model of the HMS Erebus is an accurate representation of the shipwreck. The level of detail in the model provides a clear view of the ship’s current structure and even shows details of the wooden beams and materials surrounding the wreck, as well as one of its anchors that rests off the port side.

The 3D printer used for the model was a ZPrinter 450 owned by TECTERRA. The printer operates by laying down a fine layer of powder on the build bed. This is smoothed and a print head applies a binding solution and colour. Once that layer is finished, the build bed lowers and another layer of powder is laid down and the process repeats itself. Once building is complete, the model is coated in a glue and left to harden.

Delegates are invited to visit the stand throughout the conference to learn more and to see the model first-hand. A presentation about the model will be given on Tuesday, 14 April at 14:00 at the stand.