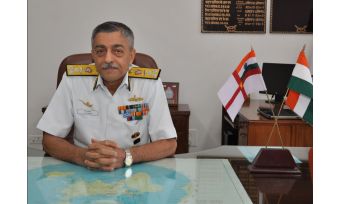 The 2019 Alexander Dalrymple Award has been presented to Vice Admiral Vinay Badhwar, national hydrographer to the Government of India, in recognition of his outstanding contribution to Indian hydrography and hydrography across the wider Indian Ocean region.

The Alexander Dalrymple Award was first awarded by the UK Hydrographic Office (UKHO) in 2006 and is named after the first hydrographer of the Admiralty. Recipients of the award are selected by the Executive Committee of the UKHO for their efforts in raising the standards of hydrography, cartography and navigation around the world.

Most Challenging Environments to Survey

Having joined the Indian Navy in 1982, Vice Admiral Badhwar has extensive hydrographic surveying experience. This includes work in the Gulfs of Kutch and Khambhat, and the Andaman and Nicobar Islands – widely recognized as some of the most challenging environments to survey in the world.

In his capacity as national hydrographer, Vice Admiral Badhwar has been a pivotal member of the International Hydrographic Organization’s Capacity Building Sub-Committee since its creation. He also leads the Indian Naval Hydrographic Office’s own regional capacity building programmes. In this role, Vice Admiral Badhwar coordinates efforts to help Indian Ocean coastal states to develop their hydrographic and cartographic capabilities – an important step to unlocking each of these states’ blue economies.

Vice Admiral Badhwar’s contribution to the sustainable development of Indian Ocean coastal economies was also recognized in 2019, when he received the Ati Vishisht Seva Medal for “distinguished service of an exceptional order during peacetime”.

Commenting on the 2019 Alexander Dalrymple Award, Peter Sparkes, the UK’s national hydrographer at the UKHO, said: “Vice Admiral Badhwar is a true champion of the hydrographic profession. He has helped to unlock the economic potential of marine geospatial data and further hydrographic science in both India and the wider Indian Ocean region.

“The important capacity building contribution of our friends and partners at the Indian Naval Hydrographic Office, who work in concert with the IHO, is helping to usher in a safer, more prosperous and more sustainable world. We look forward to continuing to work with Vice Admiral Badhwar and his team as we help all nations unlock the power of their blue economies.”

Adding his thoughts on the award, Vice Admiral Vinay Badhwar said: “This recognition would not have been possible without the support of my colleagues in the National Hydrographic Department, who worked tirelessly towards achieving the goals set forth by the United Nations and IHO. Last but not least, I am also grateful to all my fellow hydrographers worldwide for acknowledging our work.” 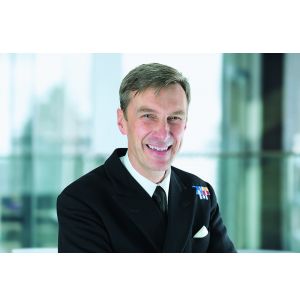