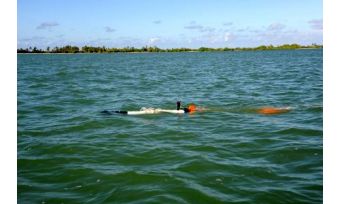 The International Group for Historic Aircraft Recovery (acronym TIGHAR, pronounced ‘tiger') foundation has organised several trips to Gardner Island, now Nikumaroro in the Republic of Kiribati based on the hypothesis that Amelia Earhart and Fred Noonan landed and eventually died on this remote Pacific island. For this purpose, OceanServer Technology recently loaned an Iver2 AUV outfitted with side-scan sonar to the organisation.

The Iver2 vehicle was operated by Seabotix to sweep large areas of the Nikumaroro Lagoon and collect side-scan sonar images. The AUV sonar data was used to identify geo-referenced targets of interest that could then be further investigated by an ROV.