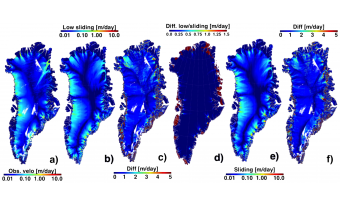 The Greenland ice sheet is a major contributor to sea level rise, adding on average 0.47 ± 0.23mm a year to the global mean sea level between 1991 and 2015, an international group of scientists has found. The cryosphere as a whole has contributed around 45% of observed global sea level rise since 1993. Understanding the present-day state of the Greenland ice sheet is therefore vital for understanding the processes controlling the modern-day rates of sea level change and for making projections of sea level rise in the future.

In a recent publication on www.mdpi.com, they provide an overview of the current state of the mass budget of Greenland based on a diverse range of remote sensing observations to produce the essential climate variables (ECVs) of ice velocity, surface elevation change, grounding line location, calving front location, and gravimetric mass balance as well as numerical modelling that together build a consistent picture of a shrinking ice sheet. We also combine these observations with output from a regional climate model and from an ice sheet model to gain insight into existing biases in ice sheet dynamics and surface mass balance processes.

All Regions of the Ice Sheet

Observations show surface lowering across virtually all regions of the ice sheet and at some locations up to −2.65m a year between 1995 and 2017 based on radar altimetry analysis. In addition, calving fronts at 28 study sites, representing a sample of typical glaciers, have retreated all around Greenland since the 1990s and in only 2 out of 28 study locations have they remained stable. During the same period, two of five floating ice shelves have collapsed while the locations of grounding lines at the remaining three floating ice shelves have remained stable over the observation period. In a detailed case study with a fracture model at Petermann glacier, we demonstrate the potential sensitivity of these floating ice shelves to future warming.

GRACE gravimetrically-derived mass balance (GMB) data shows that overall, Greenland has lost 255 ± 15Gt a year −1−1 of ice over the period 2003 to 2016, consistent with that shown by IMBIE and a marked increase compared to a rate of loss of 83 ± 63Gt year in the 1993–2003 period. Regional climate model and ice sheet model simulations show that surface mass processes dominate the Greenland ice sheet mass budget over most of the interior. However, in areas of high ice velocity, there is a significant contribution to mass loss by ice dynamical processes. Marked differences between models and observations indicate that not all processes are captured accurately within models, indicating areas for future research.