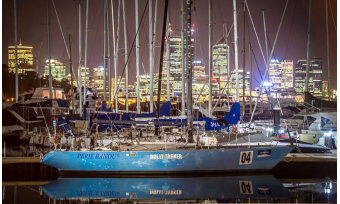 Solo yachtsman Jon Sanders will take daily samples of ocean water when he sets off on his 11th circumnavigation of the globe later this year. Sanders holds the record of the longest distance ever sailed continuously by a vessel unassisted and solo; he’s circled the globe solo more than any other person in history, but as he gears up for his record 11th circumnavigation a new mission takes precedence. On his upcoming trip, he will be collecting daily samples to be sent back to researchers at Perth’s Curtin University for analysis. This is a part of a project to gather data on how much plastic has ended up in the ocean – and what effect it may have on marine life as it deteriorates. Sanders is palling to depart on Sunday 13 October 2019.

The principal goal of the No Plastic Oceans circumnavigation is to bring global attention to the presence of plastic in our oceans, the impact of oceanic plastic pollution on marine life and the manner in which plastic is infiltrating our food chain.

The distribution of surface plastic debris in the eastern Pacific Ocean was mapped from an 11-year dataset (Environ Sci Technol: doi: 10.1021/es4053076). Reliable and detailed information for the Southern Hemisphere oceans is needed. We seek sponsors and partners who can help leverage this voyage to heighten global public awareness of the issue.

The project will extend over two years. The initial six months devoted to building and integrating all sponsor and partner efforts, preparing Perie Banou II, a Sparkman & Stephens 39, for the voyage, building global contacts and drop-off points for water samples. The next 6 to 18 months period will be the actual voyage where Jon will collect water samples every day and periodically drop them off at pre-arranged ports for despatch to marine institutions for analysis.

Throughout the voyage, Jon’s progress will be monitored daily through on-board cameras streaming live images. The final period 18 to 24 months will target follow-up releasing results of the water-born plastic pollution and leveraging Jon’s appearances, articles and media footage to heighten global attention to the presence of plastic in the world's oceans and the implications for the future of planet Earth if remedial action is not taken.