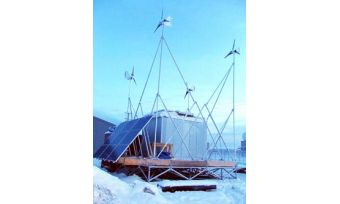 Oceanographers at the University of Alaska Fairbanks are installing a new alternative energy device along the arctic coast of Alaska. After two years of design and development, the device will provide power to scientific instruments in remote areas, where sources of electricity are often scarce.

The device, called a remote power module, is equipped with four wind turbines, a solar array and a backup generator. The wind and solar energy provide five days' worth of battery charge. If the batteries get low, the module recharges using a biodiesel generator.

Scientists will install the module in Barrow this month and test it from July to November. It will power high-frequency radars that map sea surface currents along the coast of the Beaufort Sea. The radars send signals over the water's surface, where they are reflected off the top of the waves. The radar signals are bounced back to the antennae and the data is transmitted to scientists in Fairbanks in real-time.

"The radar and remote power module allows us to better understand marine ecosystems processes, inform engineering designs for offshore activities, assist in search and rescue operations, and, in the event of a marine spill, assist in clean-up response," added Weingartner.

The radars typically are powered by shore-based power sources, such as those available in homes or commercial buildings, he said. "Power sources are few and far between in Alaska and, where available, are not necessarily ideally suited for sampling."

The module is also equipped to collect meteorological and oceanographic data and houses communications equipment that allows researchers in Fairbanks to configure the device via satellite. The module weighs about 6000 pounds and is about 16 by 20 feet wide. A key design feature of the unit is that it breaks down into modular components weighing less than 120 pounds each, so that two people can deploy, service or relocate the device.

"We made the decision to utilise renewable energy technology due to our requirements for a relatively maintenance-free, lightweight and autonomous power supply," said Hank Statscewich, researcher at the UAF School of Fisheries and Ocean Sciences and the project lead. "The hybrid combination of solar, wind, batteries and a small backup generator meets the load demands of the equipment while maintaining a compact footprint," added Statscewich.

The USD890,000 project is funded by the Department of Homeland Security.