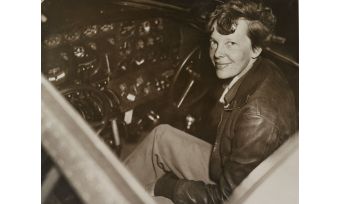 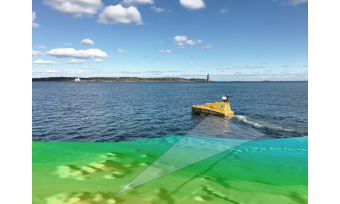 UNH's Center for Coastal and Ocean Mapping has developed an autonomous surface vehicle (ASV) that can explore the seafloor in waters that may be too deep for divers. Researchers from the University of New Hampshire's Marine School are part of the crew, led by National Geographic Explorer-at-Large Robert Ballard, setting out to hopefully find answers to questions around the disappearance of famed pilot Amelia Earhart.

Amelia Mary Earhart was an American aviation pioneer and author and the first female aviator to fly solo across the Atlantic Ocean. She set many other records, wrote best-selling books about her flying experiences, and was instrumental in the formation of The Ninety-Nines, an organization for female pilots. In 1937, as Earhart neared her 40th birthday, she was ready for a monumental, and final, challenge: she wanted to be the first woman to fly around the world. Unfortunately, she didn't make it.

Capability to Map the Seafloor

The ASV known as BEN, short for Bathymetric Explorer and Navigator, will provide Ballard and the crew aboard the EV Nautilus with the capability to map the seafloor in the shallow areas adjacent to the island where Earhart sent her last radio transmission. This area is too deep for divers and too shallow for safe navigation of the Nautilus to use its deep-water sonar systems. Maps of the ocean floor produced by BEN will be used by the Nautilus crew to target dives with remotely operated vehicles (ROVs) in the search for remnants of the plane.

BEN is equipped with state-of-the-art seafloor mapping systems, including a Kongsberg EM2040P multibeam echo-sounder and an Applanix POS/MV navigation system, which allow it to make 3-D topographic and acoustic backscatter maps of the seafloor. The Center has developed mission planning and 'back-seat-driver' control software designed specifically for piloting BEN for the seafloor mapping mission. BEN was manufactured by ASV Global, in a design collaboration with the Center.

The UNH crew aboard the EV Nautilus consists of research engineers Val Schmidt, leader of this operation, KG Fairbarn, and Andy McLeod. Roland Arsenault supports the crew from the shore. All are involved in the UNH Marine School's Center for Coastal and Ocean Mapping development and use of robotics for marine science and seafloor mapping.

Discoveries that Capture the Imagination

Recently, the New York Times published an article on the disappearance of Amelia Earhart in which Dr. Ballard relates how he has always wanted to find the remains of the plane Amelia Earhart was flying when she disappeared. In 1985, Dr. Ballard discovered the Titanic scattered beneath the Atlantic Ocean. He and his team also located the giant Nazi battleship Bismarck and, more recently, 18 shipwrecks in the Black Sea.

While those discoveries have captured the imagination of the public, Dr. Ballard believes his most important discoveries were of hydrothermal vents and 'black smokers' in the Galapagos Rift and East Pacific Rise in 1977 and 1979, along with their exotic life forms living off the energy of the Earth through a process now called chemosynthesis. Dr. Ballard is the founder of the Ocean Exploration Trust, engaged in pure ocean exploration.

The expedition, which is being covered on nationalgeographic.com, will be featured in a two-hour special titled Expedition Amelia that will premiere on National Geographic on 20 October.