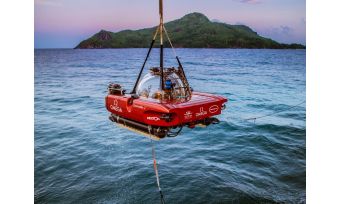 Increasing our knowledge of the marine fauna that populates the depths and the physical systems governing ocean behaviour is essential for a scientific community seeking to better understand climate change and assist political strategies to protect the underwater environment.

The remote setting creates challenges for scientists in what are increasingly collaborative endeavours, involving multi-disciplinary teams that are disparately located. Furthermore, researchers are often using advanced instruments that have never before been deployed in the field; if something goes wrong, troubleshooting can be a drawn-out and frustrating process.

Until recently, a major aggravating factor has been the lack of decent communication when a research vessel is situated at some remote oceanic outpost. However, advances in satellite infrastructure and the associated onboard equipment such as antennas and terminals mean ships can now communicate in real-time allowing shore-based partners to follow the excitement of a mission as it happens.

The extent to which connectivity can transform science missions at sea is abundantly clear in the Nekton Mission, which among other things is marrying communications with innovations in AI and Big Data to accelerate exploration and conservation of the Indian Ocean - the world’s least explored and least protected marine zone.

The initial expedition in the First Descent series took place off Seychelles in 2018. Despite having an ocean territory of 1.37 million square kilometres, to date, little research has been undertaken beneath scuba depth (30m). A primary goal of the expedition – and those to follow – is to help establish a baseline of marine life and measure the state of the ocean, with particular focus on the bathyal zone (200m to 3000m) – depths richly populated with fish and other marine fauna.

Read the full article in the July/August issue of Hydro International (both in print and online).