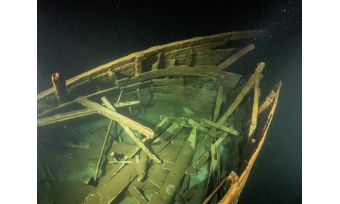 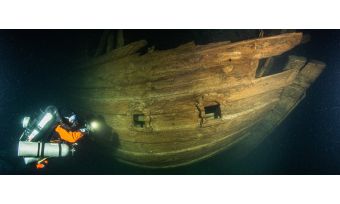 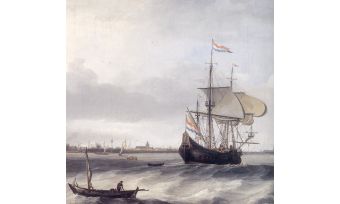 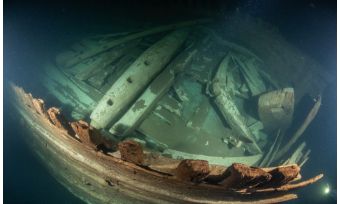 While undertaking documentation dives on some supposedly World War I or II wrecks at the mouth of the Gulf of Finland, Badewanne divers descended on one of the biggest surprises during their long careers of diving the wrecks of this eastern extension of the Baltic Sea.

The Baltic Sea has been an important trade route since the Middle Ages, as the navies of Holland and England needed endless supplies of wood, tar and hemp, all of which were available around the Baltic. From the 13th century onwards, the Hanseatic League controlled the trade, but during the 17th century the very efficient merchant navy of the Dutch Republic gained control. The trade route received a significant boost in importance and profitability after Tsar Peter the Great founded his new capital St. Petersburg at the estuary of the Neva River, in the easternmost part of the Gulf of Finland.

One ship type overtook the others and became the mainstay of this trade: the Dutch 'fluyt' ship, a three-masted ship with a capacious hull design, carrying no guns and allowing a very large cargo capacity. The fluyt ships also used very novel and advanced rigging, with cleverly designed pulley and tackle systems for hoisting and controlling the yards and sails. These advanced technical features made it possible to have a much smaller crew than earlier ship types, making the trade more profitable. Another novel feature onboard the fluyt ships was that the entire crew lived 'abaft of the main mast' – Master, mates, bosun, cook and all ratings occupied the same space ‘tween decks, and ate at the same table. This was very unusual in society at the time, and certainly in the highly hierarchic maritime world. The fluyt ships were dominant in the Baltic trade from the late-16th to the mid-18th century. However, very few of these once common ships have survived, even as wrecks.

Therefore, the Badewanne crew got a great surprise when, descending on a wreck at 85 metres depth and expecting to see an early WW I minesweeper or a schooner sunk during WW II, they realized that they were looking at an almost completely preserved Dutch fluyt ship. The ship rested on even keel on the seabed, with most of her rigging scattered around her. There was only slight damage from a pelagic trawler. The trawler seems to have swept her from the bow towards the aft, dislocating the stem, damaging the poop deck and the topmost part of the typical fluyt transom. Apart from this, the wreck is intact, the holds are full, and all the side planking is firmly in place. Even the damaged parts and components of the transom decorations, such as the 'Hoekmen', or 'Strongmen', can be found on the bottom behind the stern. Luckily, only very small bits of the trawler netting remain on the wreck.

It is only in rare places around the world, including the Baltic Sea, that wooden wrecks can survive for centuries without being destroyed by chemical, biochemical and biological decaying processes. Due to low salinity, absolute darkness and very low temperatures all year round, these processes are very slow in the Baltic. Perhaps most importantly, wood-boring organisms such as shipworm cannot live in such an environment. In temperate seas, all wooden wrecks vanish within decades, unless they are buried in sediment.

This find, a practically intact and complete Dutch fluyt ship, the Queen of the Baltic trade from almost 400 years ago, is a good example of the importance of the Baltic Sea, and especially the Gulf of Finland as a special cellar of the sea. Here, the environment preserves the wrecks, which are plentiful due to the sea being a very important trade route and battleground for many wars during centuries. All of these wrecks are within the range of modern technical diving methods.

The Badewanne team is set to continue documenting and investigating this significant wreck in cooperation with the Finnish Heritage Agency and other partners, including associate professor Dr Niklas Eriksson, maritime archaeologist at the University of Stockholm, Sweden. Eriksson explained: “The wreck reveals many of the characteristics of the fluyt but also some unique features, not least the construction of the stern. It might be that this is an early example of the design. The wreck thus offers a unique opportunity to investigate the development of a ship type that sailed all over the world and became the tool that laid the foundation for early modern globalization.”

The Badewanne diving team is a voluntary group of divers specializing in documenting World War I and II wrecks in the Gulf of Finland. This work has resulted in several documentaries, books and newspaper articles, including the National Geographic documentary Sunken Nazi Sub. During recent years, the Badewanne team has also been increasingly involved in researching the environmental threats of shipwrecks. Of these, the most significant are fuel oils remaining in the wrecks, and derelict fishing gear accumulated on them. The Badewanne team works in cooperation with the civil and military authorities of Finland and Estonia. Although the Badewanne team is Finnish, the divers in the team represent many different nationalities.