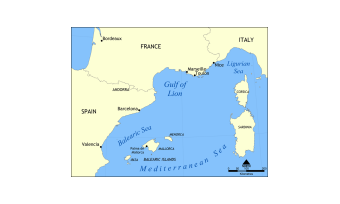 Fugro has been awarded the contract to conduct an Airborne Lidar Bathymetry (ALB) survey of the Gulf of Lion (France) to be conducted during September 2011. The primary purpose of the survey, which will be conducted to IHO Order 1b standards, is to map the sand reserves from the back of the beach to the 10 metre isobath to create a seamless, regular and digital altimetric model of the sea and the adjoining portion of land.

The contract has been awarded by Direction régionale de l'Environnement, de l'Aménagement et du Logement (DREAL) with technical evaluation of the project by the Service Hydrographique et Océanographique de la Marine (SHOM) and will provide data that can be directly compared to Fugro's previous ALB survey of the region conducted in 2009. Management of this region is essential for the protection of the coast from erosion and potential loss of habitat, risk prevention from pollution, inundation and other natural events as well as planning and management of development activities in the coastal zone and scientific research.

While contributing to the important coastal zone management roles of DREAL and SHOM in the management, the project will mark the first international deployment of the new Fugro LADS Mk 3 ALB system. The Fugro LADS Mk 3 ALB system utilises a sophisticated laser sensor fitted to an aircraft to accurately measure water depth and collect supporting data over both the marine and coastal zone environments. The system has been engineered and built by Fugro for safe, high-speed and cost-effective surveys in clean, shallow coastal areas in depths of up to 80 metres and is available for deployment worldwide.