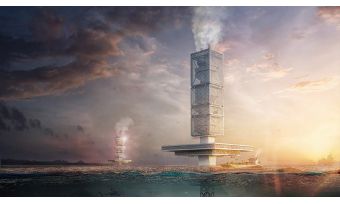 Architectural designer and visualiser Honglin Li has proposed deploying floating high-rise waste-to-energy plants, fuelled by plastic waste, to clean up the oceans while generating electricity. The sci-fi proposal, called Filtration Skyscraper, envisages placing unmanned towers on abandoned oil rigs in parts of the oceans where plastic waste accumulates. The idea has been published on Dezeen, a digital magazine on design.

The concept was developed for the 2019 eVolo skyscraper competition, an annual competition that recognises projects that challenge concepts around vertical architecture and its relationship with the natural and built environment. Li's design was awarded an honourable mention.

His idea is to place sophisticated machinery in the conceptual towers. These would generate electricity and biofuels from plastic and other pollutants extracted from seawater. It involves converting an abandoned oil platform into a vertical recycling skyscraper, according to the designer. He is convinced that it could filter the floating garbage and clean the seawater while taking on the world's energy crisis. Honglin Li proposes placing the towers in the so-called Great Pacific Garbage Patch, where billions of plastic particles have accumulated in a rotating current called a gyre.

The Great Pacific Garbage Patch contains an estimated 1.8 trillion pieces of plastic, although most of these have broken down to confetti-sized pieces. Just 3% of the plastic in the gyre is thought to be floating on the surface. An estimated 4.8 to 12.7 million tonnes of plastic end up in the oceans each year. Circular-economy charity the Ellen MacArthur Foundation estimates that by 2050 there will be more plastic than fish in the oceans.

Although the concept may be worth further developing, not everybody is convinced it will solve the pollution problem. Turning the plastic into CO2 (and noxious gases) is no better for the environment than burning fossil fuels, opponents think.  Dutch non-profit The Ocean Cleanup also plans to burn some of the plastic it collects from the Pacific Ocean. Most of the plastic it harvests with its floating rigs will be recycled, with the remainder burned in waste-to-power plants.

In the July/August issue of Hydro International, we published a feature on the Ocean Cleanup Project.