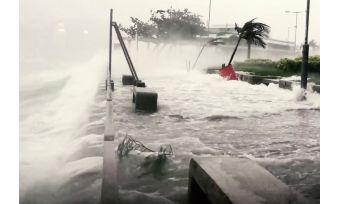 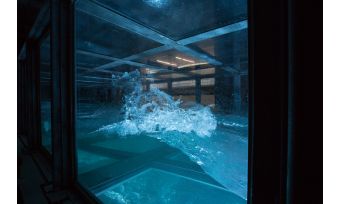 As the 2018 Atlantic hurricane season unfolds, millions of people along the Eastern seaboard of the USA are keeping a careful watch on the weather forecast. What are researchers doing to improve the prediction of hurricane intensity – and ultimately to help save lives? While experts are able to forecast the track a hurricane will take with increasing accuracy, predicting its intensity is much more of a challenge.

“We saw several times in this last hurricane season where storms just intensified really rapidly, and that process is not well forecast right now,” says the University of Miami’s Professor of Ocean Sciences, Brian Haus.

Haus is director of the Rosenstiel School of Marine and Atmospheric Science’s Alfred C. Glassell, Jr. Surge Structure Atmosphere Interaction Laboratory – otherwise known as SUSTAIN. Here, he and a team of researchers are trying to improve forecasts of hurricane intensity and associated storm surges. Their efforts are supported by advanced scientific tools from Nortek, a Norwegian acoustic instrumentation developer.

“The ultimate goal of our research here is to save lives by improving hurricane forecasts,” Haus explains. “We want to be able to plan evacuations more smartly, to evacuate only the people that need to be evacuated.”

The importance of predicting hurricane intensity

Although the high winds and heavy rain from hurricanes are dangerous, it is the storm surges – a rise in sea level caused by hurricane intensity and the strong winds of the hurricane pushing seawater onshore – that pose the greatest threat to property and human lives. When Hurricane Katrina hit land in 2005, over 1,500 people lost their lives to the storm surges, which reached up to 26 feet (8 metres) above normal sea level.

In the same year, Hurricane Wilma surprised everybody when it powered up from a Category 2 to a Category 5 hurricane in a matter of hours.

Then when Hurricane Irma headed towards south Florida last fall, millions of people – including Haus – fled from the oncoming winds and storm surges that were forecast to reach over 4 metres in some areas. Unlike Katrina and Wilma, Irma weakened, and storm surges in many places were less than anticipated.

The power of a hurricane

Storms, including storms that become hurricanes, travel huge distances across the ocean before reaching land. But moving across the sea surface isn’t like gliding across ice – even for a storm. Waves and sea spray can create friction that causes the storm to drag, creating what is known as the drag coefficient. Just how strong a storm will get depends on how much heat the storm can gain, the wind speed, and the drag coefficient.

To improve forecasts, we need to be able to accurately measure what’s going on at this interface between air and sea, but doing so out in nature, in the middle of a hurricane, is no easy task – which is why SUSTAIN is a very special research laboratory.

“We have a unique capability to study what happens at the air–sea interface in really intense hurricane conditions in a three-dimensional environment,” Haus says. “No other facility in the world can match the capabilities we have for doing this type of research.”

Researchers need to take many different measurements very quickly if they are to understand what is happening in this highly intense, rapidly evolving environment.

Some of these measurements are obtained with the Nortek Aquadopp Profiler, a small but powerful current profiler that is attached to the bottom of the tank. In the middle of these on-demand hurricanes, this current profiler is looking up towards the surface, giving the researchers full and accurate measurements of the speed and direction of water flow, from the bottom of the tank and almost all the way to the surface. “It’s really nice to have, to help us understand what’s happening in the tank as a whole,” comments Haus.

The Aquadopp gives the big picture, but to get even more detail – particularly near the surface, where a lot of the action is happening – the team also use the Nortek Vectrino Profiler, a velocimeter capable of rapidly measuring fluctuations in the speed of water flow in smaller areas over a sustained period of time. “The surface is moving so much, you would lose all that information if you weren’t able to get it quickly,” Haus explains.

The researchers’ efforts are already improving hurricane intensity forecasts. Previously, researchers thought that the drag coefficient and wind speeds increased at the same rate. But when the SUSTAIN team went through the measurements they collected, they found that for hurricanes up to Category 3, the drag coefficient actually levels off when wind speeds reach around 100 feet per second (30 metres per second). “That’s now implemented in the modern forecast models, and as a result they’re getting better intensity forecasts,” Haus continues.

SUSTAIN’s work doesn’t end there. The researchers are now studying the drag coefficient in Category 5 hurricanes. “The ultimate result of this work would be to make a computer model that allowed us to get a forecast, five days out, within one Category of intensity, reliably,” says Haus.

“It’s important to me, my family, my community, Miami,” he emphasises. “We are in a city that is subject to hurricanes. The next time a storm is coming at us, we all have to decide what we’re going to do with our houses, with our families.”

Watch this video to learn more

Valeport's Upgraded SWiFT SVP Will Operate Down to 500 Metres 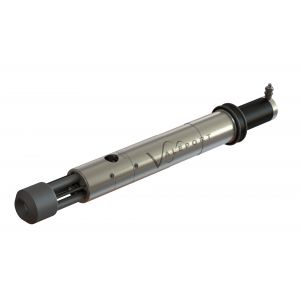