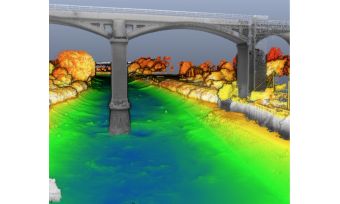 Bibby HydroMap, a UK-based company, has successfully completed an asset inspection survey of several bridges and the Weaver Sailing Club along the River Weaver in Cheshire (UK). This was an opportunity to demonstrate its marine 3D imaging capabilities in a highly dynamic and fast-flowing environment. The River Weaver is a marine connection between a number of businesses along the river and the Manchester Ship Canal and, ultimately, the Irish Sea, the integrity of which is paramount to their commercial operations.

Locate Any Obstructions to Navigation

The aim of the survey was to assess the condition of the bridges which span the river, both above and below the waterline, as well as the condition of the Weaver sailing club pontoon, river embankments and riverbed in order to locate any obstructions to navigation.  The purpose of the survey was to provide a baseline conditional survey of the marine assets, locate any areas of damage, identify items of debris/obstructions along the waterway and perform scour monitoring of the bridge abutments.

Bibby HydroMap’s own dedicated shallow-draft vessel Pulsar, which is permanently mobilised with a full suite of sensors required to carry out hydrographic and marine asset inspection surveys, was used throughout the operations to undertake data acquisition. As a 7.2m Cheetah catamaran, Pulsar is road- transportable on a trailer and can be rapidly mobilised throughout the UK to undertake survey operations, both scheduled and in response to an emergency.

Data acquisition was undertaken in a single pass, utilising a Teledyne T20-P multibeam echosounder, high-resolution scanning sonar and a Carlson Merlin laser scanner. The combined dataset from all sensors was used to provide information, allowing the structural condition of the bridges above and below the waterline to be assessed, and to provide detail on any potential damage.

Survey results were provided as high-resolution point cloud visualisations of specific structures and features which had been identified throughout the processing and interpretation phase of the project.

Sunken Barges and an Overturned Car

The survey, which was the first to use a combination of sonar and laser scanning to map the assets' integrity, identified several cases of structural damage. Damage to the underside of a road bridge was observed, which could not have been surveyed conventionally on land, and damage was also located sub-water along with the foundations of a warehouse. A number of debris items were also located along the river, including several sunken barges and an overturned car, all of which would pose risks to the navigation of the river.

Bibby HydroMap specialises in the acquisition, interpretation and reporting of highly accurate and precisely positioned seabed and sub-seabed survey data. Its expert knowledge, together with the use of innovative technology, supports a range of offshore operations. Detailed information on the survey described can be found here.