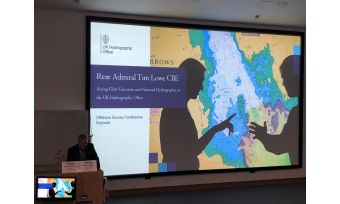 The decade of ocean science, starting in 2020 will make the future bright for the marine geospatial industry, said rear admiral Tim Lowe, acting Chief Executive of the United Kingdom Hydrographic Office and the National Hydrographer. Lowe was talking about the era of geospatial data at Offshore Survey, the conference held at the fringes of Ocean Business 2019, the ocean technology exhibition in Southampton, UK, at the National Oceanography Centre.

Lowe emphasized that hydrographic data supports and further grows prosperity, sustainability and security of life at sea. According to him, it’s up to the hydrographic field to make sure that governments make better-informed decisions in a transparent time to improve life on the planet.

Lowe referred back to SDG 14 – conserve and sustain the use of oceans, seas and marine resources for sustainable development, and SDG 9 – build resilient infrastructure, promote inclusive and sustainable industrialization and foster innovation. He sees both goals as crucial to the path of the hydrographic sector in the next decade, which was named as the decade of ocean science by the United Nations. This is the same institute that drew up the sustainable development goals.

During the Offshore Survey conference, chairman Gordon Johnston introduced - besides the acting CEO of UKHO Tim Lowe - more than 30 other speakers on topics as diverse as data & digitalization, autonomous vehicles, coastal & environmental and education & competencies.