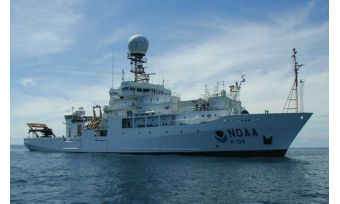 "We had just finished setting up and securing the scientific equipment in the main lab of RV Ronald Brown when we found out that our research cruise to the South Atlantic had been cancelled", Channing Prend, a graduate student in the laboratory of Scripps physical oceanographer Lynne Talley, writes on his blog. "The ship was being recalled to the U.S. by the National Oceanic and Atmospheric Administration due to growing concerns about the COVID-19 pandemic. The news came mere days before we were scheduled to set sail after all scientific personnel had already arrived at the port in Cape Town, South Africa.

"The decision to call off the expedition was understandable given all the uncertainty in the world right now, but it came at the cost of irreplaceable data, which would have helped quantify decades-long changes in the heat and carbon storage capacity of the deep ocean", he continues. "While our original science plan would not see completion, the captain agreed to a slight detour to deploy six autonomous biogeochemical profiling floats as part of the Southern Ocean Carbon and Climate Observations and Modeling (SOCCOM) project."

"I Felt Guilty for Being Somewhat Sheltered"

"As we prepared to deploy the floats amidst news about shelter-in-place policies being enacted and exponential increases in the number of COVID-19 cases and deaths, I struggled with the appropriateness of conducting fieldwork under these circumstances. It seemed frivolous to worry about float deployments given the challenges facing those back on land, and I felt guilty for being somewhat sheltered from the barrage of news, due to the ship’s limited bandwidth.

"But I have come to think that now, more than ever, our society needs science and science-based policy", Channing writes. "The data collected by these devices will provide new information about the role of the ocean in the climate system, and in doing so, ultimately contribute to a better world. When viewed through that lens, our science mission took on a whole new urgency."

About the SOCCOM Project

The Southern Ocean Carbon and Climate Observations and Modeling project (SOCCOM) is an NSF-sponsored programme focused on unlocking the mysteries of the Southern Ocean and determining its influence on climate. Housed at Princeton University and administered by the Princeton Environmental Institute, SOCCOM draws on the strengths of teams of investigators across the U.S. as well as participating in international observational and simulation efforts. SOCCOM’s mission is to drive a transformative shift in the scientific and public understanding of the role of the vast Southern Ocean in climate change and biogeochemistry.