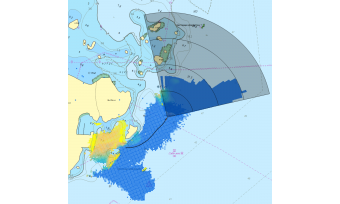 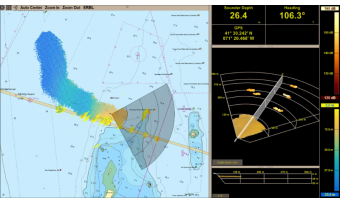 FarSounder has announced its Local History Mapping (LHM) feature, which offers users the ability to build a 3D map of the seafloor over which they have recently sailed. This map is updated with every ping and is displayed as an overlay on top of the system’s nautical chart display. This new overlay is displayed in conjunction with the real-time sonar overlay. This combination enables users to quickly see what lies ahead and what they have recently passed over. LHM capabilities will be included as part of FarSounder's standard navigation sonar software starting with SonaSoft 3.3.

Since FarSounder 3D forward-looking sonar has a wide horizontal field-of-view ahead of the vessel, a single pass of a FarSounder sonar with LHM can survey a wider swath of the seafloor than a standard echosounder. In addition, the large coverage zone from a single ping results in a huge overlapping area from one ping to the next. This means that vessel operators will not have to worry about missing obstacles between pings.

Due to the performance characteristics of FarSounder’s forward-looking sonar systems, Local History Mapping is based on a bathymetric survey engine that was developed in-house from the ground up. The Company has also invested heavily in the database infrastructure associated with the storage and integration of large survey datasets. These investments will accelerate the release of additional bathymetric mapping capabilities.

Existing FarSounder customers who wish to add Local History Mapping to systems are encouraged to fill out FarSounder’s Software Update Request form. New customers will automatically receive these capabilities when their FarSounder-500 or FarSounder-1000 sonars are set up and commissioned. 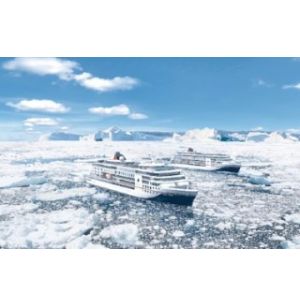