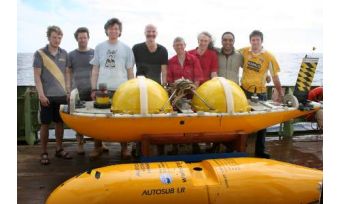 Autosub Long Range has successfully completed its first set of sea trials at a location in the deep Atlantic Ocean, 300 miles south-west of the Canary Islands. Hosted by research ship the RRS Discovery, this is the latest in the Autosub series of autonomous underwater vehicles (AUVs), .

Autosub Long Range is a new type of AUV developed at the National Oceanography Centre (NOC) in Southampton, UK. By travelling rather slowly (0.4 metres per second), and keeping a tight rein on the power available to its sensors, it will be capable of missions of up to six months duration and ranges of 6,000 kilometres. It can dive to a depth of 6,000 metres.

The trials were a success in all of these respects: the AUV flew straight and level, with deviation in depth of only a few centimetres, and heading and pitch controlled to within 0.5 degrees. The Autosub engineering team, lead by Steve McPhail of the NOC, also obtained very useful data on the vehicles hydrodynamic drag and control properties.


The vehicle will also have the capability of powering down and hibernating while anchored to the seafloor, waking up periodically or when it senses an interesting event. This opens up many interesting science mission opportunities, from, for example, long transects across the ocean basins to very detailed and long-term monitoring of a small area.


The sea trials on Discovery in January were the first time that the AUV has been operated in water. The objectives of the trials were to confirm that the AUV could dive from the surface, control its heading and pitch accurately, and surface (giving good exposure to its radio antenna which are used for communications with operators anywhere in the world through an Iridium satellite modem).