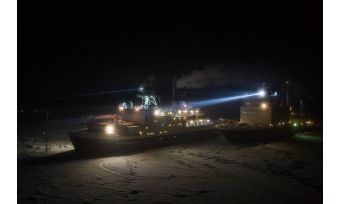 Surrounded by the Polar Night, the participants in the MOSAiC expedition engaged in a logistically challenging shift change: roughly 100 people traded places between the German research icebreaker Polarstern, which has been drifting with the Arctic sea ice since October 2019, and the Russian resupply icebreaker Kapitan Dranitsyn. After a one-week delay in its departure, due to a cyclone in the Barents Sea, it took the ship ten days to make its way in increasingly difficult ice conditions to the Polarstern. While the participants from the first phase are now homeward bound, the darkest and coldest phase of the MOSAiC expedition awaits the new team.

Drifting with the Arctic Ice

In the course of the past several weeks, the international team from the first leg installed a complex research infrastructure on the Arctic ice. On the MOSAiC ice floe, currently located at 86°34’ North and 119° East, 270 kilometres from the North Pole, the ‘ice camp’ was erected around the trapped icebreaker Polarstern: a research station designed for the various focus areas of the MOSAiC expedition. The ship and its ice camp have already drifted with the Arctic ice about 200 kilometres towards the North Pole – accompanied by an extensive network of monitoring stations, which were deployed in a 40-kilometre radius around the Polarstern by the Russian Arctic and Antarctic Research Institute (AARI) icebreaker Akademik Fedorov during the first few weeks of the mission.

Force of the Ice

“The first phase of the expedition wasn’t easy,” reports MOSAiC expedition leader Prof Markus Rex from the Alfred Wegener Institute, Helmholtz Centre for Polar and Marine Research (AWI). “The ice, at less than a metre, is unusually thin, highly dynamic and constantly in motion. We very often saw new cracks and channels in the ice, or the formation of several-metre-tall pack ice hummocks: jagged piles of ice, formed when rising pressures cause the ice floes to press against one another and stack up. The force of this crashing ice impressively demonstrates the power of nature, in whose hands we now find ourselves. In addition, newly formed hummocks often buried our equipment, which we then had to retrieve and set up all over again – not to mention the cracks in the ice, which are dangerous for the team and instruments alike.”

Read the full story on www.awi.de.