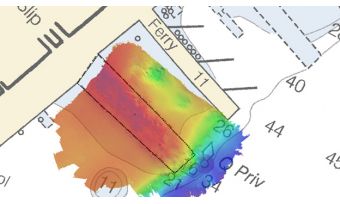 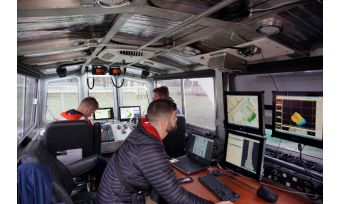 On 27 November 2017, a New York City ferry departing from Pier 11 in the East River struck an underwater pylon, stranding over 100 passengers. The pylon was most likely from the remains of an old pier demolished several years earlier. At the request of the U.S. Coast Guard (USCG), NOAA’s Navigation Response Team 5 (NRT 5), homeported in New London, Connecticut, assisted in the investigation.

NRT 5 arrived in Jersey City, New Jersey, on December 4, to prepare for surveying. The following day, the team picked up an investigator from the USCG, deployed the boat, and headed towards Pier 11. Using the team’s multibeam echosounder and with guidance from the investigator, the team surveyed the remains of the former pier.

With the pier investigation finished, the team received an additional request from the USCG to survey a wrecked sailboat in Raritan Bay, a water body between New York and New Jersey. The sailboat was quickly surveyed, allowing the team time for good training opportunities. With the mission completed, NRT 5 headed back north to Connecticut, where the data will be processed and products created to help the USCG in their investigation.