The workshop closed with an exchange of views on the participants’ experience in applying the law of the sea in the region. This meeting was attended by representatives of 15 States (Antigua and Barbuda, Barbados, Belize, Colombia, Costa Rica, Dominica, Dominican Republic, El Salvador, Guatemala, Guyana, Haiti, Jamaica, Mexico, Nicaragua and Saint Kitts and Nevis).

Designed for officials and government experts specialising in the field of the law of the sea from Ministries of Foreign Affairs, Justice, Fisheries, Transport and the Marine Environment, regional workshops have so far been held in Dakar, Kingston, Libreville, Singapore, Bahrain, Buenos Aires, Cape Town, Fiji and Mexico City.

The workshops form one of the four pillars of capacity-building programmes of the Tribunal. Since 1997 the internship programme has given 256 interns from 81 States the opportunity to gain an understanding of the work and functions of the Tribunal. This programme is open to the participation of students of law, international relations, public relations, political science, library science and translation.

The capacity-building and training programme on dispute settlement under the United Nations Convention on the Law of the Sea for young government officials and researchers, which has been organised in cooperation with the Nippon Foundation since 2007, has provided 36 officials and researchers from 36 States with thorough training in the peaceful settlement of law of the sea related disputes. The Summer Academy of the International Foundation for the Law of the Sea has welcomed 184 participants from 84 States since its creation in 2007.

Last updated: 24/10/2020
Download as PDF
Print news
Send news
Latest Law of the Sea news
Seven Members of the International Tribunal for the Law of the Sea Elected 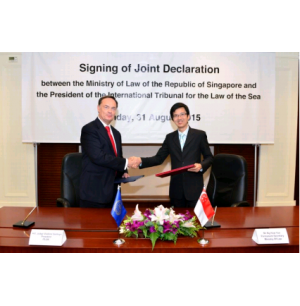