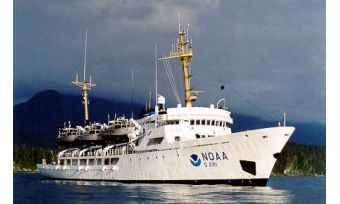 In April next year, a team of 60 scientists and crew from the US National Oceanic and Atmospheric Administration will come to the Mariana Islands aboard the NOAA ship Rainier to map the seafloor of the Marianas and do coral reef research. NOAA’s Office of Coast Survey and Office of Marine and Aviation Operations will be working together to perform the ocean surveys to measure the water depths, the regional online newspaper the Saipan Tribune reports.

The Mariana Islands are a crescent-shaped archipelago comprising the summits of fifteen mostly dormant volcanic mountains in the western North Pacific Ocean, between the 12th and 21st parallels north and along the 145th meridian east. They lie south-southeast of Japan, west-southwest of Hawaii, north of New Guinea and east of the Philippines, demarcating the Philippine Sea's eastern limit.

They are found in the northern part of the western Oceanic sub-region of Micronesia and are politically divided into two jurisdictions of the United States: the Commonwealth of the Northern Mariana Islands and, at the southern end of the chain, the territory of Guam. The islands were named after the influential Spanish queen Mariana of Austria following their colonization in the 17th century.

Detailed information on how deep the water is and the many characteristics of the seafloor would also be useful in determining fisheries habitat, understanding coral reef health as well as marine geological processes. For the 2020 operations, there will be two missions: coastal and habitat mapping, and the Mariana Archipelago Reef Assessment and Monitoring Program, or MARAMP.

The mapping operations in the Marianas were last carried out in the ’70s and, with the change in technology and environment over the course of four decades, the CNMI could benefit greatly from the remapping of its ocean.

Salem Masry, an Icon in the Hydrographic World, Has Died
Latest news