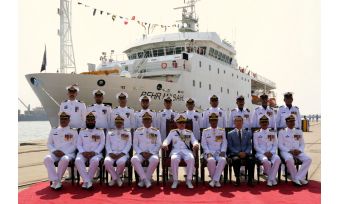 "This fully equipped modern vessel will fulfil the Pakistan Navy’s operational requirements, and support the development of the national maritime sector,” said Chief of the Naval Staff Admiral Zafar Mahmood Abbasi at the commissioning ceremony at the Pakistan Navy Dockyard in Karachi. In addition, modern hydrographic services will also be offered to allied countries.

While highlighting the role of the Pakistan Navy in safeguarding the maritime frontiers of the country and ensuring the safety of sea trade routes, the admiral expressed his confidence that commissioning of Behr Masah is a leap forward in the field of modern hydrography and marine sciences, a governmental press release says.

Friendship Between Pakistan and China

Speaking about the Sino-Pak partnership, the naval chief said that deep-rooted and ever-growing Pak-China friendship is unparalleled and has always lived up to expectations. This induction is yet another manifestation of it. Citing the China Pakistan Economic Corridor (CPEC) as an example, he said this flagship project of the Belt and Road Initiative (BRI) shall benefit both the countries immensely.