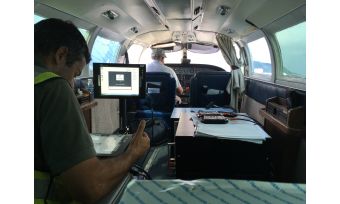 "Check and double-check your data before getting somebody else to check it for you", says Phil Payne, survey delivery manager of the UK Hydrographic Office when he talks about hydrographic programmes to support the blue economic growth, intentional projects and the use of lidar for charting purposes. "There will be a continued drive towards autonomy and automated processing.” Prior to his work with the UK Hydrographic Office (UKHO), Phil Payne spent 25 years in the Royal Navy as a hydrographic and meteorology specialist. Since joining the UKHO in 2016, he has worked in a number of different roles, most recently as its Survey Delivery Manager - a role he has held since 2017.

As Survey Delivery Manager, Payne is in charge of contracting out and organising surveys around the world, which his organization undertakes as part of the UK Government’s Commonwealth Marine Economies (CME) and Overseas Territories Seabed Mapping Programmes. This forms part of the work carried out by the wider Hydrographic Programmes team to support blue economic growth and help territories to fulfil their international maritime safety obligations under the Safety of Life at Sea (SOLAS) Convention.

"So far, we’ve covered more than 19,500km2 throughout these programmes and have conducted surveys in Commonwealth states across the Caribbean and Pacific to support sustainable economic growth and safe navigation”, Payne says.

The data generated during these surveys will be used to help these small island developing states make use of their marine resources in a sustainable manner. Potential benefits for these states include expanded trade capacity and security through the accurate charting of ports and shipping lanes; the identification and assessment of suitable areas for coastal infrastructure development; disaster planning and resilience; and environmental protection through the identification of sensitive coastal and marine ecosystems.

Read the full story in the November/December issue of Hydro International.