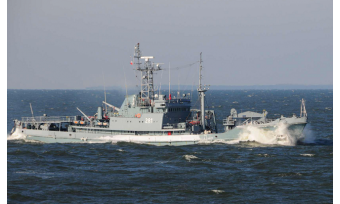 Teledyne RESON has been selected as provider of a high-resolution multibeam system to the Polish Navy. The company has delivered the market-leading SeaBat T50-R multibeam sonar system. The system is currently being installed in the hull of the rescue vessel ORP Piast at the Nauta Shipyard in Gdynia.

SENControl has not only been contracted to deliver and install the Teledyne RESON SeaBat T50-R sonar system, but also the delivery, installation and integration of a Dynamic Positioning System and a complete 4-point mooring system.

ORP Piast was commissioned to the Polish Navy in 1974 as a multi-role rescue-salvage vessel. In the late 1990s ORP Piast received an extensive refitting and modernization. ORP Piast is now again undergoing an update at the Nauta Shipyard in Gdynia  – including the installation of a SeaBat T50-R.

After the update and commissioning of the new systems, OPR Piast will be operating primarily in the Baltic Sea as a Submarine Support and Rescue Vessel and, with the new sonar system installed, will also boast seabed mapping capability.