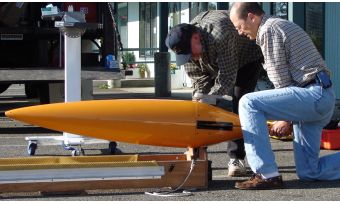 What are underwater gliders and how do you use them? Answers can be found at the 2019 UK Glider Community Workshop, hosted at the NOC in Southampton on 14-15 November. Registration is open now. The workshop will take place on Friday 15 November, and will be preceded by a networking reception and dinner on the evening of Thursday 14 November at The Dancing Man Brewery. The event provides an opportunity for the UK research community to come together to discuss the latest technology developments and scientific discoveries related to ocean gliders.

The UK Glider Community Workshop will follow on from the Marine Autonomy & Technology Showcase (12–14 November) which will feature complementary presentations from technology development groups and the marine robotics industry. Further information and registration details are available at http://bit.ly/gliders2019.

The concept of an underwater glider was first explored in the early 1960s with a prototype swimmer delivery vehicle named Concept Whisper. The sawtooth glide pattern, stealth properties and the idea of a buoyancy engine powered by the swimmer-passenger were described by Ewan Fallon in his Hydroglider patent, submitted in 1960.

In 1992, the University of Tokyo conducted tests on ALBAC, a drop weight glider with no buoyancy control and only one glide cycle. The DARPA SBIR programme received a proposal for a temperature gradient glider in 1988. DARPA was aware at that time of similar research projects underway in the USSR. This idea, a glider with a buoyancy engine powered by a heat exchanger, was introduced to the oceanographic community by Henry Stommel in a 1989 article in Oceanography, when he proposed a glider concept called Slocum, developed with research engineer Doug Webb.

They named the glider after Joshua Slocum, who made the first solo circumnavigation of the globe by self-built sailboat. They proposed harnessing energy from the thermal gradient between deep ocean water (2-4 °C) and surface water (near atmospheric temperature) to achieve globe-circling range, constrained only by battery power on board for communications, sensors, and navigational computers.

By 2003, not only had a working thermal-powered glider (Slocum Thermal) been demonstrated by Webb Research (founded by Doug Webb), but they and other institutions had introduced battery-powered gliders with impressive duration and efficiency, far exceeding that of traditional survey-class AUVs.

These vehicles have been widely deployed in the years since then. The University of Washington SeagliderScripps Institution of Oceanography Spray, and Teledyne Webb Research Slocum vehicles have performed feats such as completing a transatlantic journey and conducting sustained, multi-vehicle collaborative monitoring of oceanographic variables.

In 2011, the first wingless glider, SeaExplorer was released with a large payload capacity, dedicating the first third of the vehicle to interchangeable payloads, in addition to typical CTD sensors. The vehicle achieves 1-knot speeds, is equipped with externally rechargeable Li-Ion batteries and its torpedo shape is able to glide,  relying on two pairs of small static rear fins for stability.

In 2004, the US Navy Office of Naval Research began developing the world's largest gliders, the Liberdade class flying wing gliders, which uses a blended wing body hull form to achieve hydrodynamic efficiency. They were initially designed to quietly track diesel-electric submarines in littoral waters, remaining on station for up to 6 months. The current model is known as the ZRay and is designed to track and identify marine mammals for extended periods of time. It uses water jets for fine attitude control as well as propulsion on the surface.

Caption: A University of Washington Seaglider being prepared for deployment.