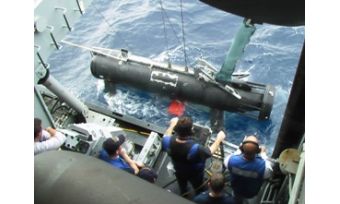 The second production Remote Multi-Mission Vehicle (RMMV) has recently been delivered to the U.S. Navy to further enhance the mine countermeasures capability for both DDG 51 Arleigh Burke Class destroyers and the Littoral Combat Ship (LCS). The first RMMV was delivered to the Navy in April. The Remote Multi-Mission Vehicle (RMMV) is a semi-submersible, semi-autonomous, unmanned vehicle that tows a variable-depth sensor to detect, localise, classify and identify undersea threats at a safe distance from friendly ships.

The RMMV is the integral mobile subsystem of the Navy's AN/WLD-1 Remote Minehunting System (RMS), which includes the RMMV, a launch and retrieval system for the RMMV, the RMMV-towed sonar sensor, advanced communications equipment and software that integrates RMS into the host ship's combat system.

In its minehunting role, the RMMV transmits real-time mine sonar images to its host ship over a data link system. This mine reconnaissance capability will allow a naval Strike Group Commander to quickly and safely assess the threat of mines in prospective areas of operations. In its AntiSubmarine Warfare (ASW) role the RMMV tows an active transducer and a multi-function receive array, transmitting submarine contact data via data links to the host ship.