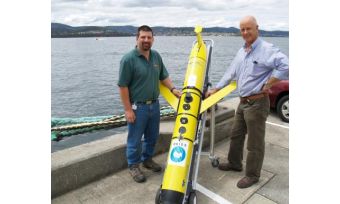 An AUD200,000 CSIRO coastal glider is bound for Queensland, Australia, to be deployed in Moreton Bay to investigate the impact of the recent flooding on marine ecosystems. Dr Andy Steven from CSIRO's Wealth from Oceans Flagship says the glider's deployment is part of a research program to monitor the extent of the flood plume into Moreton Bay and assess its effects.

Dr Steven said that this disastrous flood provides CSIRO with a rare opportunity to understand how the marine ecosystems respond to massive inputs of fresh water and sediments. "The glider will generate three-dimensional maps illustrating the impact of the flooding on the marine waters receiving the flow of the Brisbane River."

CSIRO biological oceanographer Dr Peter Thompson says there are only two of the robotic monitors in the world with this array of sensors. "With these we can obtain a view inside the cloud of mud and debris dispersing through Moreton Bay," Dr Thompson says.

Dr Andy Steven, CSIRO's Wealth from Oceans Flagship: "This will help us build better models to predict how the system is being affected now and how it will be affected in future."

Dr Steven says the data obtained during the daily glider surveys will be used together with satellite images and other data. "Satellite images can clearly show the surface patterns of cloudy water (turbidity) and nutrients, but a companion instrument - the glider - is required to provide a sub-surface view," he says.

In collaboration with the Queensland Department of Environment and Resource Management, the Healthy Waterways Partnership and universities, CSIRO started deploying research teams into the bay yesterday to collect water samples to complement the glider data, satellite images and existing monitoring activities.

"We're also aiming to establish continuous moorings at key locations to provide ongoing measurements of the bay's health," Dr Steven says. "This information will help us understand the dynamics of the flood plume and its likely effects on seagrass, fish, dugong, turtles, coral and other marine flora and fauna. It will also give an idea of the bay's resilience after this extreme event."

CSIRO and its partners are planning to conduct a parallel research program in the Fitzroy River-Keppel Bay region using a similar glider. Dr Thompson says the assessment will be the first major survey by the glider, purpose-built for use in Australian waters. "We have done routine trials in Tasmanian inshore waters but the Queensland projects are really what they have been designed for - a complete shallow-water assessment during a significant marine event," he says. Their sensors will measure light, oxygen, temperature, salinity, nutrients, organic matter and phytoplankton.