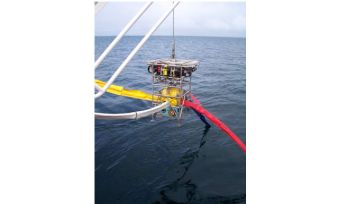 The versatility of Hydro-Lek’s HyBIS robotic underwater vehicle has been further demonstrated in the deployment of Ocean Bottom Seismometers (OBS) and Ocean Bottom Electromagnetic Receivers (OBEM) on the seafloor in the Arctic Ocean. The expedition was conducted by members of the Marine Geology team from Southampton’s National Oceanographic Centre (NOC) to collect data from sites of methane gas and seafloor gas vents.

HyBIS, a mnemonic for Hydraulic Benthic Interactive Sampler, is a 6,000m-rated, fully modular, electro-hydraulic platform designed to operate in conjunction with existing deck handling and cable systems. The vehicle comprises an upper command and power unit with a lower hydraulic and mechanical docking interface. The dock allows a variety of different tooling modules to be interfaced with the command module including a 0.5 cubic metre hydraulic grab, a five-function manipulator arm and retractable sample tray, a passive winch to recover up to 3 ton bottom landers – and now a module for the precise positioning of OBS and OBEMs on the seafloor.

Traditionally seismometers have been randomly dropped from the side of a ship into the ocean. However modern geophysical studies require instruments to be placed on solid parts of the seabed, with a precise position and preferred orientation.

HyBIS is able to meet these requirements - and within modest budgets. Unlike a conventional ROV, HyBIS does not have any flotation – it is suspended directly from the ship by its armoured umbilical cable allowing it to carry payloads of up to 750kg. Using its two powerful thrusters HyBIS is also able to target and accurately position OBS instruments within a small tight array and to orientate OBEMs to their correct compass alignment.

Like other modules, the OBS deployment module is an open-frame stainless steel chassis which is attached to the command module via our four-point docking release mechanism. The module was specifically designed to deploy OBS and OBEM instruments which have a common footprint and rely on anchor weight to hold them to the seafloor attached to flotation and via an acoustic or timed release system to return them to the surface.

HyBIS has played a major role in many scientific achievements including the discovery, filming and sampling of the deepest known hydrothermal vents on the planet and recovery of two different seabed landers containing scientific equipment worth over GBP300,000. HyBIS is designed to operate using the same deck handling gear and electro-fibre-optic cable systems found on most modern research vessels. This enables significant savings to be made in both time and cost.

German marine research centre, GEOMAR Helmholtz Centre for Ocean Research Kiel, have also chartered HyBIS using their own OBS/OBEM deployment frame and research vessel off the west coast of Norway. They have subsequently ordered and taken delivery of their own system which will be deployed in April 2013 for a Taiwanese charter.