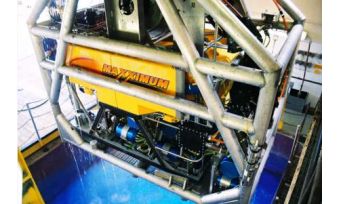 A recent trials partnership between Sonardyne International, UK, and USA-headquartered Oceaneering International has resulted in the development of a Fly-By-Wire (FBW) system for ROV control in any water depth, allowing the vehicle to hold station indefinitely and navigate to real-world coordinates automatically.

A Sonardyne SPRINT system was installed on one of Oceaneering’s Maxximum ROVs and integrated with a Sonardyne Ranger 2 Ultra Short Baseline (USBL) system for acoustic aiding of the Inertial Navigation System (INS). The trials took place in the Gulf of Mexico in water depths of 3,057 metres (10,030 ft) and results showed that continuous hovering of the ROV in mid-water beyond Doppler Velocity Log (DVL) range was possible, as well as automatic navigation to waypoints.

The majority of ROV navigation systems utilise an Attitude and Heading Reference System (AHRS) and DVL to provide a relative or dead reckoned position. These systems are subject to time and distance based position errors and only operate close to the seabed, meaning mid-water operations are conducted via manual control so real world or relative coordinates cannot be easily used by the ROV pilot. To address these limitations, Sonardyne and Oceaneering have developed a navigation and control system solution utilising the dual output of INS and AHRS data from SPRINT to provide ROV Dynamic Positioning (DP) in all water depths with capabilities beyond current, without affecting reliability or ease of use.

The system has two methods of ROV control: ‘Navigation’ and ‘Passthru’. In ‘Navigation’ mode, the ROV control system uses INS positioning optimised for DP with real-world position, velocity and attitude data at high output rates. This speeds up ROV operations by improving vehicle control precision, automating station keeping and delivering FBW capability. ‘Navigation’ mode is available continuously in all water depths when USBL data is available. If the INS solution should become degraded or is unavailable, the system automatically reverts to ‘Passthru’ mode. ‘Passthru’ mode is a dead reckoned solution using self contained AHRS data that is inherently robust and reliable when combined with DVL data.

The results of the trial showed that continuous hovering of the ROV in mid-water beyond DVL range was possible, as well as automatic navigation to waypoints. When the ROV was in DVL range of the seabed the ‘Navigation’ mode performed equally as well as the ‘Passthru’ mode but with the added benefit of real-world referenced positioning data from the USBL system. The faster update rate (20Hz, compared to the 5Hz rate of the DVL) has the potential to refine vehicle control precision.

Mark Philip, ROV Technology Manager at Oceaneering, stated that autonomous flight control is an increasingly important feature for ROVs. Oceaneering’s Fly-By-Wire system has greatly enhanced the efficiency since its introduction several years ago. The integration of the SPRINT inertial navigation system further enhances this capability by providing hands-free hovering and navigation throughout the entire water column.