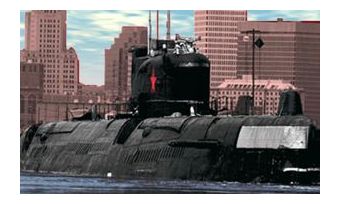 On Halloween day in 1965, the Russian submarine K-77 was commissioned and assigned to the Soviet Northern Fleet. She was a Juliett class sub manned by 28 officers and 54 crewmen. Despite her small size, 282 feet long and just under 3,200 tons, the US Navy considered her a formidable adversary. The sub was armed with four nuclear cruise missiles and 22 torpedoes. Her stealth came from a tiled rubber exterior and silent running diesel electric motors which propelled her at a submerged speed of 18 knots. She could remain under water for 800 hours and descend to a safe depth of 775 feet.


At the end of the cold war, the K-77 was determined to be obsolete. Jari Komulainen, "first son-in-law" to Finland’s president Kolvisto, used his influence to convince the Russians to sell him the sub, which he promptly turned into a restaurant/tourist attraction. The venture was profitable, but didn’t prove to be the lucrative investment the promotor expected. In 1998 the K-77 was leased to a Canadian businessman and towed to Tampa, Florida. Plans to develop the sub as a tourist attraction in St. Petersburg proved a failure. It wasn’t long before the promoter filed bankruptcy and the sub reverted back to Komulainen.

The Finnish businessman had no interest in bringing the sub back home, so he put it up for auction on E-Bay with a starting bid of USD1 million. There were no serious bidders. However, the auction attempt caught the attention of a film company working on a movie about a Soviet nuclear submarine that had a reactor meltdown on her maiden voyage killing all 20 sailors onboard. The sub was towed to Halifax, Nova Scotia for the filming of K-19: The Widowmaker staring Harrison Ford and Liam Neeson.

In 2002, the sub was purchased by the USS Saratoga Museum Foundation and towed to Providence, Rhode Island where it was opened to the public as the "Russian Submarine Museum". For the next 5 years the sub was one of the most popular attractions in the state’s small capital. All that changed in April of 2007. A severe storm battered the city with heavy rain and strong winds. The sub was thought to be berthed in a safe place behind the city’s hurricane barrier. However, with the barrier closed, huge pumps discharged storm water directly onto the stern of the sub. This allowed water to begin leaking through doors put in the pressure hull for tourists to enter. The nor’easter pounded the sub with wind and water for more than 24 hours until it could take no more, and she sank to the bottom of the Providence River.

Museum officials were distraught, but quickly decided the K-77 should be salvaged. Consulting with the Coast Guard, marine surveyors, and salvage professionals, a plan was developed to raise the sub. However, there were two primary concerns to be addressed before a salvage operation could begin. One was the potential of pollution from a small amount of fuel in the sub, the other was the submerged mooring lines and chains still attached. These would be a hazard to divers that were needed to seal and secure the sub for raising. Before starting any salvage work, an underwater survey would have to be performed. The best tool for this job was an ROV.

Officials contacted the environmental services company Clean Harbors which had purchased a SeaOtter ROV the previous year, to expand the marine services arm of its business. The survey of the K-77 presented several challenges to the Clean Harbors team. It would be difficult to navigate the ROV in the low visibility water of the Providence River, and the mooring lines and chains that were an entanglement hazard to divers, also posed a threat to the ROV. The team spent two days at the site carefully maneuvering the vehicle around obstacles while viewing and recording images in the comfort of their control van. When it was over they had successfully performed a complete survey of the crippled vessel and gathered enough information to allow divers to safely enter the water, and ensure there was no risk of pollution from leaking fuel oil.

With the survey completed, a team of US Army and Navy divers along with a contingent of Federal, State, and local authorities descended on the site and went to work on raising the sub. The K-77 is now on the surface, back on her berth, and undergoing a thorough clean-up. Museum officials hope the restoration can be completed soon and the sub will once again be opened to the public. They are confident she will enjoy some renewed interest as a tourist attraction with another interesting page added to her long and fascinating history.