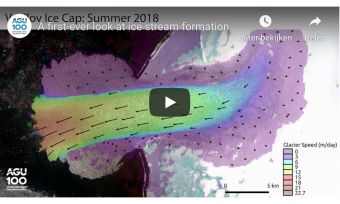 Scientists have witnessed the formation of a fast-flowing river of ice dumping into the ocean. They monitored the Vavilov ice cap in the far northern Russian Arctic. What they found is the onset and full formation of an ice river, one of only a small number on Earth. The research has been published in the Geophysical Research Letters journal by a team of geoscientists from Cornell University, University of Colorado Boulder, and the University of Kansas, geologist Trevor Nace reports in Forbes.

The ice cap experienced a glacial surge in 2013, with sudden dumping of glacial ice. However, the ice did not stop and continues today, turning into a fully formed river of ice moving at a maximum speed of 25 metres (82 feet) per day into the ocean.

Since 2013, the ice cap has shed nearly 11% of its mass, equivalent to 9.5 billion tons of ice, Nace says. Meanwhile, the ice cap has not accumulated significant ice during that time as it is located in a very dry polar desert. This means, over the past 6 years, the glacier has experienced significant losses to its overall volume, causing significant shrinking and thinning of the glacier. Read Nace's full story in Forbes.