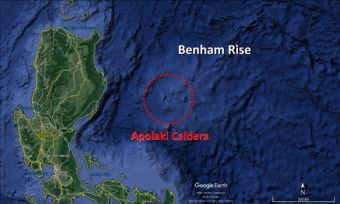 A group of marine scientists has recently discovered a large igneous massif east of the island of Luzon, located at the bottom of the Philippine Sea. According to the study published, this massif represents the remains of Earth’s largest known caldera. The caldera is named “Apolaki,” after the Filipino mythical god of sun and war.

The caldera has a diameter of approximately 150 km (93 miles), twice the size of the famous Yellowstone caldera in Wyoming (US). It is a large, unique form of a volcanic crater formed by the collapse of a volcano into itself. Features like a breached rim, intra-caldera benches, and a resurgent dome indicate a multi-phase volcanic history consisting of both quiet and explosive eruptions.

The marine geophysicist’s group that discovered the existence of what seems to be the world’s largest caldera consists of New Zealand-based Filipino scientist Jenny Anne Barreto, along with co-authors Ray Wood and John Milsom. Their study also revealed for the first time the structure of the Benham Rise—also called Philippine Rise—which is described as an oceanic large igneous province at the western margin of the Philippine Sea.