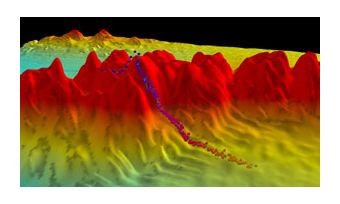 Maps and images of seabed habitat, geology and biological data in the seas around North-West Europe can now be viewed online. This resource has been created by the Joint Nature Conservation Committee, in a five nation project called, The Development of a Framework for Mapping European Seabed Habitats, or MESH.

Important to the project was discovering more about the processes that determine the existence of certain habitats in a particular location. These habitats are defined by a combination of unique conditions such as current, depth of water, temperature and the rock structure under the seafloor. Understanding and classifying this makes it possible to predict the existence of certain habitat at a particular kind of location.

From this has come predictive mapping which will help determine the likely habitat at a location and avoid expensive field survey undertakings. Predictive mapping can also be used to evaluate large areas of seabed that would otherwise be impractical to survey.

A tool for the project in gathering information from hard to reach locations, has been the Saab Seaeye Tiger ROV. One such place was Stanton Bank, off the West Coast of Scotland. Here they needed to examine the habitat at the point where the rock face meets the soft seafloor. Although an acoustic survey of the area had been undertaken, they had no idea what actually lay at this difficult to access location. The answer was to send down the free-swimming, 1000 metre rated, Seaeye Tiger. They were able to manoeuvre the vehicle to the precise point of study, where its directional thrusters are powerful enough to hold the ROV steady in the currents whilst sending back high definition video film.

The ROV had been made available by the Agri-Food and Biosciences Institute (AFBI), the Northern Ireland based contributing partner to the MESH project. The AFBI were early to recognise the advantages to marine science of opting for a rugged and reliable ROV, proven in the tough oil and gas industry, for tackling the equally demanding marine science environment.

With many organisations competing for the resources offered by the seabed around Europe, the MESH project means they can now determine the impact of their decision by simply going to the interactive mapping system, and zoom into the area of interest.