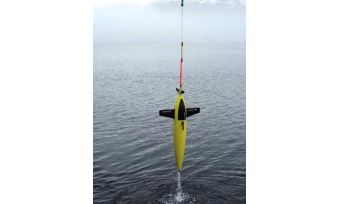 Kongsberg Underwater Technology has recently supplied five new Seaglider autonomous underwater vehicle (AUV) systems to the National Oceanography Centre (NOC) in Southampton, UK. The AUVs were ordered by NOC’s Marine Autonomous and Robotic Systems facility (MARS), and will become part of a fleet of underwater gliders that are made available to research institutes around the United Kingdom. With this delivery, MARS will now have 10 Seagliders in its pool of AUVs.

MARS supplies and supports gliders for scientists at the NOC, as well as institutes and Universities around the UK, to carry out their research programmes. 2013 has seen significant investment by the UK government in this technology, furnishing the Natural Environment Research Council (NERC) with a fleet of over 30 gliders. These gliders are being used to support and enhance oceanographic research by UK scientists around the world, and the new KONGSBERG Seagliders will see service from home waters to the Antarctic.

The new systems will immediately be put to use by the Scottish Association for Marine Science (SAMS), which also owns two of its own Seaglider AUVs. All of the vehicles will be used in three ongoing, long term research programmes: FASTNEt, the Extended Ellet Line and OSNAP.

FASTNEt is a four year programme to study the ocean/shelf exchange using novel observations and model techniques to resolve the key seasonal, interannual and regional variation absent from existing knowledge.

Stretching across the Atlantic Ocean between Scotland and Iceland, the Extended Ellett Line is a major gateway for water exchange between the Nordic seas and the Atlantic. Regular in-situ monitoring is essential to develop the understanding of circulation in this area, which has a significant impact in the moderation of Western Europe’s climate.

OSNAP is an international programme started in 2013 and is designed to provide a continuous record of the full-water column, trans-basin fluxes of heat, mass and freshwater in the subpolar North Atlantic. It will generate new knowledge and understanding of the gyre’s wider impacts on climate and will help improve long term climate predictions and weather forecasting.

Stefan Gary, a research associate at SAMS, says that due to their ability to operate in adverse weather, gliders are an essential component of the strategy for wintertime observations, which, in the past, have been very difficult to achieve. Clearer insight into wintertime conditions will shed new light on the understanding of upper ocean variability.

In all three programmes, Seagliders will be a vital tool in the collection of physical oceanographic data over extended durations and geographic areas.