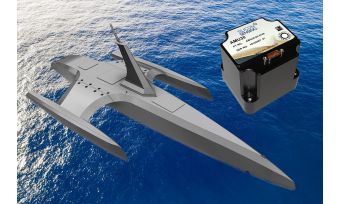 Led by marine research organization ProMare and powered by IBM, she will sail from Plymouth, England to Plymouth Massachusetts, USA. Instead of a captain and crew, she will use computer vision, machine learning, cutting-edge technologies and sensors to navigate and detect hazards.

Travelling at a maximum speed of 12 knots, MAS is expected to take just 12 days to reach the coast of Massachusetts – a fraction of the 66 days of the voyage four centuries ago. Throughout the voyage, the ship will also function as a scientific laboratory. On-board sensors will transmit data for critical research programmes in areas such as maritime cybersecurity, marine mammal monitoring, ocean microplastic analysis and sea-level mapping.

About the Mayflower Autonomous Ship Project

Driving the MAS project are ProMare (a charitable research foundation), IBM and Plymouth University. Also coming on board is the UK's University of Birmingham, which will be responsible for the use of virtual, augmented and mixed reality technologies in the MAS mission. Birmingham's Human Interface Technologies Team is leading the development of a Mixed Reality Telepresence Science Station, which will allow schoolchildren and members of the public around the world to experience the transatlantic mission (www.promare.org/mayflower).

About the Celebration and History of Mayflower

The original Mayflower voyage carried 102 passengers and a crew of 30 to a new life in the pursuit of religious freedom and opportunity. They set sail from Plymouth, England for America in September 1620 and became known as the Pilgrims. They spent 66 days at sea with no guarantee of reaching America yet defied the odds and successfully established a permanent settlement at Plymouth Massachusetts.

Silicon Sensing Systems Ltd is a gyroscope and inertial systems engineering development company, jointly owned by Collins Aerospace and Sumitomo Precision Products. The company was formed in 1999 and is, today, a market leader in silicon, micro-electro-mechanical systems (MEMS)-based navigation and stabilization technology. Almost 30 million MEMS gyroscopes and accelerometers have been supplied to thousands of customers since the company’s formation (www.siliconsensing.com).

Established in 2001, ProMare is a non-profit corporation and public charity that promotes marine research and exploration throughout the world. Its team of experienced archaeologists and engineers execute a variety of research projects independently and in concert with academic, corporate, public and governmental organisations and agencies that are designed to advance man's knowledge of history and science and the natural world (www.promare.org).

About the University of Birmingham's Human Interface Technologies Team

The Human Interface Technologies (HIT) Team, based in the Extreme Robotics Laboratory at the University of Birmingham, has been pioneering the development and uptake of virtual, augmented and mixed reality and telerobotic technologies in the UK since 2003, building on over 32 years of experience in those domains. The team's award-winning research is helping to avoid the 'technology push' failures evident in the 1980s, 1990s and early 2000s by developing and evaluating demonstrators in defence, healthcare, heritage and advanced robotics that emphasize the importance of exploiting human factors knowledge during the design of innovative human-system interfaces (www.birmingham.ac.uk/hit-team).

About the University of Plymouth

The University of Plymouth is ranked as one of the UK's top ten modern universities in the UK (Times Higher Education Young University Rankings 2019), and its origins go back over 150 years to the School of Navigation, which was formed in 1862. The University covers a broad range of disciplines through its research and teaching and is a global leader in marine and maritime research, including marine litter research, and was the first university to identify the widespread occurrence of microplastics  (www.plymouth.ac.uk/research/institutes/marine-institute).