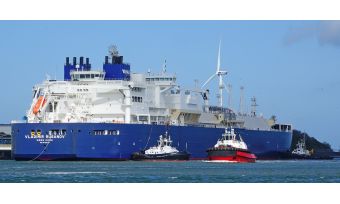 At least six top ice-class Arc7 tankers travelled through the eastern part of the Northern Sea Route in the last days of September and early October. It is the most complicated part of the Arctic shipping route. Normally, ice lies thick in the area until late July and the waters start to freeze again in early October, the Moscow Times reports.  According to the Northern Sea Route Administration, two ships, the Vladimir Vize and Georgy Ushakov were on their way to or from South Korean ports, while the Nikolay Urvantsev, Fedor Litke, Vladimir Rusanov and Vladimir Voronin sailed to and from China. This constitutes almost half the current fleet of ice-breaking tankers serving the Yamal LNG project. A total of 13 carriers have been built for the project and two others will start shuttling to the remote Russian Arctic coast during the year.

The carriers have been built for the Yamal LNG, the project operated by Russian natural gas company Novatek, and all of them shuttle to the Sabetta terminal. Never before have so many of them been in the eastern part of the Northern Sea Route. The shipments are part of Russia's growing LNG exports to the Asia-Pacific region. Ice maps show that the Northern Sea Route was ice-free in the first days of October  and that the ice rim has retreated to the north of the 80th parallel across the Russian Arctic.

In the course of a five-year period, a total of 22 trans-Arctic shipments have been conducted by the Chinese shipping company COSCO, according to the Barents Observer. Despite rapid ice melting along the Russian Arctic coast, the transit shipments across the route remain sparse. In 2018, a total of 491,000 tons of cargo was shipped via the route, most of it by COSCO’s eight Chinese ships.