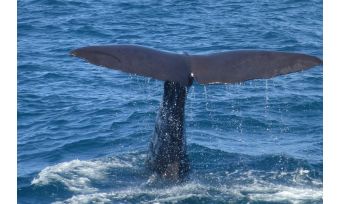 Scientists are now even more concerned about ocean pollution after around 100kg of plastic were discovered inside a sperm whale that was found dead on a Scottish beach last week. A necropsy performed by the Scottish Marine Animal Strandings Scheme revealed around 100kg (approx. 220lbs) of human junk – including rope, sections of fishing nets and other plastic debris – in the pelagic mammal's stomach. The 22-ton young whale was found on the banks of Harris, a Hebridean island off the coast of northwest Scotland.

“By the time we got to it had been dead for 48 hours and pretty much most of the guts blew out of the side when we stuck a knife in it,” the group wrote in a Facebook post. “Animals this size are so well insulated that even though the temperature outside barely got above freezing, they don’t cool down and hence decompose incredibly quickly."

“In this whale’s stomach was approximately 220 pounds of marine debris — a whole range of plastic including sections of net, bundles of rope, plastic cups, bags, gloves, packing straps and tubing,” it added. “All this material was in a huge ball in the stomach and some of it it looked like it had been there for some time. It was desperately sad,” resident Dan Perry told BBC News. “It does show the scale of the problem we have with marine pollution.”

The SMASS said it found no evidence the plastic in the whale’s stomach factored into its beaching. “This amount of plastic in the stomach is nonetheless horrific, must have compromised digestion, and serves to demonstrate, yet again, the hazards that marine litter and lost or discarded fishing gear can cause to marine life,” it said. “We are looking in more detail to see if we can work out quite why this animal ended up with so much of it in its stomach.”

For centuries, whales, dolphins, porpoises and seals have regularly stranded around the coasts of the UK. The underlying causes of these stranding events are not always clear and the role that human activity may play in either directly or indirectly causing single or mass strandings remains controversial.

The Scottish Marine Animal Stranding Scheme (SMASS) has been in operation since 1992. It is part of the Cetacean Strandings Investigation Programme (CSIP), and is funded by the Scottish and Westminster governments. The projects aim to provide a systematic and coordinated approach to the surveillance of Scotland's marine species by collating, analysing and reporting data of all whales, dolphins and porpoises (collectively known as cetaceans), seals, marine turtles and basking sharks that strand on the Scottish coastline.

Investigation of stranded marine animals can yield substantial information on the health and ecology of these fascinating but often little understood species, while also helping to highlight some of the conservation issues they may face. The long term accumulation of stranding data facilitates the investigation of spatio-temporal trends and patterns in stranding numbers and mortality.

The data collected by the Scottish Marine Animal Stranding Scheme is available to collaborators from all over the world, and our archive contains a unique collection of samples and information from over two decades of continuous research.