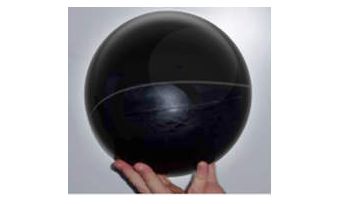 SonarBell is a passive sonar device on show during Ocean Business from 9 to 11 April 2013 in Southampton, UK. It has been developed by UK-based Subsea Asset Location Technologies (SALT) Ltd, a ‘spin-out’ company from the Defence Science and Technology Laboratory (DSTL). The technology was first used for military applications but is now being deployed across many commercial and scientific disciplines.

Having spent many years reducing underwater sonar signatures, the scientists in DSTL have now developed a device that is “as loud as possible” when exposed to an incoming signal but requires no power source or peripheral equipment to provide effective undersea asset location. It is non-magnetic, with no moving parts, no electronics to maintain or replace, and is omni-directional. It can be deployed singly or as part of an array.

Subsea assets are intrinsically valuable at all stages of the life-cycle whether during deployment, monitoring, management, de-commissioning or safe retrieval. Sadly in many cases these valuable assets, whether important wreck sites, power cables or pipelines, are not properly managed which often leads to the asset being damaged, destroyed, lost or moved by other users of the sea space. “Marking” assets with sonar devices that record the state and position of the asset to the operator is not new but has been up until now expensive and quite cumbersome.

How does it work?

SonarBell operates by focusing and reflecting acoustic energy, much as a lens or mirror can focus light. Just like a lens or mirror, SonarBell is a completely passive device that works by focusing and re-radiating the sound energy back in the direction from whence it came. Manufactured at sizes ranging from 50-275mm; a 200mm Sonarbell (Figure 1) can deliver the same sonar target strength as a 2m diameter metal plate whilst being relatively light weight, easy to handle and deploy. It works well with all types of sonar from highly sophisticated hull mounted sonar for mine-hunting and side scan devices at one end of the scale to more simple fish finders and echo sounders at the other. It works equally well with AUV/UUV and hand held sonar for work done at close range.

SonarBell features a double acoustic echo which is separated by a distance dependent on the diameter of the SonarBell. Using these features the SonarBell is easily detected by computer automated detection and can assist the operator in locating equipment faster even in the most complex sonar environments. This acoustic structure is created as part of its construction; in addition at manufacture stage each SonarBell can be tuned to a single or range of frequencies to ensure the maximum resonance and power is achieved at the sonar operating frequencies.

SonarBell is pressure tested to 4,100m depth and as it is environmentally inert, it can be deployed in a number of ways; by a simple net bag for short term immersion or on rigid stanchions and clamps for long term use. The addition of low surface tension coatings to reduce any fouling means that the lifespan of the device can be as long as 25 years. The only thing not possible with SonarBell is acoustically shadowing the surface or stopping the shell resonating by clamping something around the device.

SonarBell was deployed on the Coronation wreck site off Penlee Point, southwest of Plymouth, UK, in early 2012. The Coronation sank near Plymouth during a violent storm in 1691. She lay undiscovered until 1967 and eventually became a designated 'protected wreck'. The charity that manages the wreck on behalf of English Heritage aims to continue the study of the site and to promote awareness by promoting licensed access to the site so that everyone can understand and enjoy this nationally important shipwreck. SonarBell has been deployed to aid skippers taking divers to the Coronation place dive shot lines to ensure no damage is done to the wreck site. It is deployed about a metre above the seabed and is roped to the wreck site to allow easy access for the divers. For more information on the wreck project please go to www.coronationwreck.co.uk

The Canadian Hydrographic Service in Dartmouth, Nova Scotia has deployed SonarBell units offshore in the Bedford Basin to calibrate and performance check its Kongsberg EM3002 multi-beam systems used by the Hydrographic Service, Atlantic Region. The use of SonarBell allows system performance checks to be carried out before the vessel is deploying on a task ensuring that the system is set-up correctly and performs as expected.

The GHD network of engineering, architecture and environmental consulting companies has deployed SonarBell devices to allow for the speedy recovery of water quality meters in place around the Australian coast. These meters collect data on the quality of water around mineral extraction and drilling sites. These sites can have strong currents and often very limited visibility making recovery by divers very difficult. By using SonarBell, the location of the meter is much quicker. The skipper of the recovery vessel said “it’s never been so easy to find these things”.