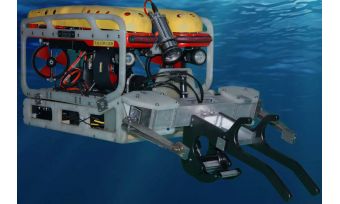 Independent subsea contractor Film-Ocean has ordered its tenth Saab Seaeye Falcon, making the company one of the biggest fans of the world’s most popular underwater robot, according to John Bloomfield, global business development manager at the subsea contractor. He explains Film-Ocean’s specially devised deployment methods: “Utilising our collapsible launch and recovery system (LARS), which has allowed us to deploy the Falcon from some tight positions on oil platforms, FPSOs and wind farm installations, we have also incorporated a Falcon in our containerized system, which has a combined zone II control room and integrated LARS with 1100m of tether.”

Film-Ocean has developed and patented a chain measuring system for FPSO and offshore wind farm mooring systems which is easily deployed, with the Falcon providing results in real time and is accurate to 0.1mm. Saab Seaeye says that the versatility shown by Film-Ocean’s engagement of the Falcon demonstrates the success of the design’s concept that has made it the most popular underwater robotic vehicle of its class in the world.

The Falcon’s concept comes from creating a reliable vehicle, packed with five thrusters and an intelligent distributed control system, all fitted into a 1 x 0.5 x 0.6 metre-sized vehicle that can adopt different tools and sensors for undertaking numerous intricate and demanding tasks. It is highly manoeuvrable and stable in strong crosscurrents, whilst undertaking exacting tasks with steadiness and precision. Film-Ocean’s latest Falcon comes complete with a running lock latch system and a TriTech Sonar.