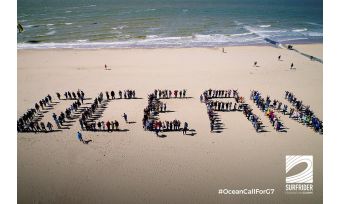 The next G7 will be held in Biarritz from 24 to 26 August 2019. Following the first day of the "G7 Dialogue" with civil society, Surfrider Foundation Europe hopes that the G7 will state a clear objective regarding the recognition of global warming and, more particularly, regarding the preservation of the oceans. To meet this challenge and place it at the heart of the negotiations, Surfrider Europe will organise the ‘Ocean Pavilion’. This pre-summit event will bring together politicians, international scientific and economic experts, sports figures and civil society representatives to ignite conversations and develop proposals to alert the major powers of the G7 to the urgency of ocean preservation and encourage them to make concrete commitments.

Emmanuel Macron, the President of France, is committed to involving key civil society players in the preparation and preliminary discussions of the G7 in France and a new format to propose solutions for global environmental protection will be used. Surfrider Foundation Europe will take this opportunity to host the Ocean Pavilion, a public platform to nurture conversations and idea-sharing between international stakeholders on the topic of ocean protection.

During four days of conferences and workshops, the Ocean Pavilion will bring together approximately 80 prominent personalities including political representatives, international experts, players from the scientific, economic, sports, political and associative communities to discuss four themes which encompass the major issues of ocean conservation:

This event format has been strategically designed to support a comprehensive view of the present challenges facing ocean protection and encourage dialogue among stakeholders to suggest feasible solutions. At the conclusion of the Pavilion, an official statement will be released detailing the current state of public opinion on ocean matters and how key civic players expect the leaders of the largest global economies to take progressive action. This statement will be broadly disseminated and is expected to be taken into consideration during G7 Summit discussions.

Lost Half of the World's Corals

The ocean is the primary resource impacted by climate change. It plays a major role in regulating global climate by generating half the world’s oxygen, despite the continued decline of its overall health, the foundation states in its press release. "Plastic pollution, which has now entered the food chain, claims the life of 100, 000 marine mammals each year. In just 40 years, we have lost half of the world's corals." Surfrider Europe expects international powers to recognise ocean preservation as a global concern and to adopt a clear roadmap to strengthen regulations which respect it.

Surfrider Europe was created in 1990 by a group of surfers who wanted to preserve their playground. Grass-roots activism to protect our oceans and coasts is at the core of the organisation. It is a non-profit organisation whose purpose is to protect and showcase the importance of lakes, rivers, the ocean, waves, and coastlines. Currently, it has over 13,000 members and is active across 9 countries through its volunteer-run branches. For almost 30 years, Surfrider Foundation Europe has been taking action as a recognised authority in three areas of expertise: marine litter, water quality and public health, coastal management and climate change.  At this moment, over 2,000 volunteers are taking action every day in 43 local branches in 11 European countries.