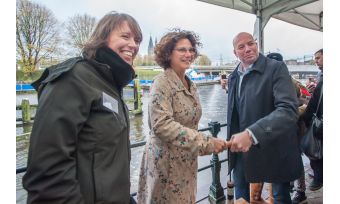 Last week, the Ocean Cleanup launched the Interceptor and we described how Mr Trash Wheel is cleaning rivers. This week, a new initiative was launched in Amsterdam, the Netherlands. It is called The Great Bubble Barrier, a bubble screen that removes plastic from the water of the Amsterdam canals and prevents canal plastic from flowing into the North Sea. This makes the city of Amsterdam a global pioneer in the fight against plastic pollution.

The Bubble Barrier was installed by The Great Bubble Barrier in the Westerdok in the Westelijk Havengebied and commissioned by the Regional Water Authority Amstel, Gooi and Vecht and the municipality of Amsterdam. The water authority and the municipality previously worked together in the "Amsterdam Clean Water" coalition, which strives for clean water, without plastic, and aims to prevent the outflow of Amsterdam plastic towards the open sea. The Westerdok is at the tip of Amsterdam's historic canal belt and an exit to the river IJ.

How Does the Bubble Barrier Work?

Lots of Plastic Waste in the Canals

Plastic particles can be found everywhere in nature, including in fish and drinking water. This is harmful to animals and the environment and possibly to people too. Waternet, the organization that manages all water affairs within the city of Amsterdam, operates five garbage boats which collect 3,500 kg of waste daily from Amsterdam's water, including large amounts of plastic. Annually, they remove around 42,000 kg of plastic from their waterways. This plastic floats predominantly on or directly below the water surface. Besides this plastic, there is also a lot of other plastic, including waste lower in the water column and plastic waste flowing out of the city.

With the Bubble Barrier as a new measure, the Regional Water Authority is looking for a solution to the plastic in suspension and smaller plastic waste (1-20 mm) which remains in the canal water, despite the garbage boats. "Plastic in our water is becoming an increasing problem, also for the work of the water management board. It has profound effects on the quality of our water and therefore on everything that lives in or near the water. This is precisely why it is important for the water management board to collaborate intensively with others to make a stand against this socially urgent problem. The innovative Bubble Barrier in Amsterdam is a good and important example of this," says Sander Mager, executive board member of the Regional Water Authority Amstel, Gooi and Vecht.

The municipality of Amsterdam is also committed to stopping the pollution of the canals and the outflow to rivers and the open sea. For example, from 2020 onwards, only reusable plastic cups and environmentally friendly, biodegradable confetti may be used at events in the city. The municipality itself also no longer purchases single-use plastic. Despite these measures, waste still ends up in the canals. “Although we want to prevent plastic waste as much as possible through new measures and the installation of enough waste bins, a lot of plastic still ends up in the canals with or without intent. I am therefore delighted to enter into a partnership with the water management board to do something about canal plastic,” says Marieke van Doorninck, municipal councillor for sustainability.

The collected waste will be examined by the Plastic Soup Foundation. It will monitor how much plastic is being caught, what the most common items are and the most common brands (if still visible), where it comes from and how dangerous it is for people and the environment.

The Bubble Barrier has been extensively tested in recent years and has demonstrated in various previous pilots that plastic (1 mm and larger) can be collected from flowing waterways. The previous pilots also demonstrated that the Bubble Barrier intercepts 86% of floating test material in inland water. The effect on the smaller microplastics (0.02 mm - 0.5 mm) is currently being investigated in a study with purified wastewater at the Wervershoof wastewater treatment plant in the Netherlands.

The Bubble Barrier in Amsterdam has been launched by The Great Bubble Barrier and Waternet, commissioned by the Regional Water Authority Amstel, Gooi and Vecht and the City of Amsterdam, in collaboration with van den Herik Sliedrecht, STOP! Micro Waste, Canadianpond and the Plastic Soup Foundation.