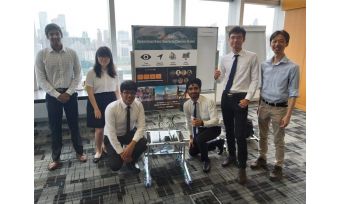 Hong Kong student engineers and scientists have developed a semi-submersible robotic marine rubbish collector, which they have named the ClearBot. It was awarded the second prize at the Global Grand Challenges Summit in London in September. Now they want to put it to good use to help tackle the intractable problem of marine plastic waste worldwide.

Thousands of tonnes of plastic rubbish drift in the seas of Asia, which is the region environmentalists cite as the biggest source of the petrochemical waste that chokes coastal waters and leaves beaches looking like rubbish dumps. Clearing up the massive piles of refuse is a never-ending task, but this new invention could help to make a difference, the South China Morning Post reports.

“This is a very prestigious international competition so it’s quite an achievement,” says project supervisor Dr Hayden So Kwok-hay, associate professor in the department of electrical and electronic engineering at the University of Hong Kong (HKU). “We are using aerial drone navigation and putting it in a vessel,” says team member Sidhant Gupta, an HKU computer science graduate. The core of the system is a waterproof electronics pod, and doesn’t need a metal frame but can be mounted on a simple plank of wood or bamboo frame, if that is the best solution for the local environment, he adds.

The judges were impressed not only with the technology that went into the ClearBot, but also the fact the system was designed to solve a global problem in a practical way and with the use of open-source technology. Coastal communities in developing nations can access the software free of charge, come up with their own hardware solutions, and adapt the basic design to meet local conditions. The system is also relatively cheap – the prototype’s components cost less than US$900.