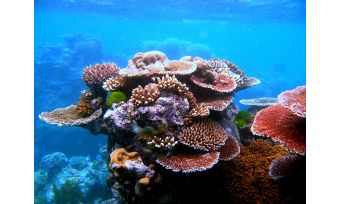 Robust recovery of lost colours in underwater images remains a challenging problem, say engineer and oceanographer Derya Akkaynak and Tali Treibitz, her postdoctoral research advisor, of the University of Haifa and the Leon Charney School of Marine Sciences (Israel). They recently showed that this was partly due to the prevalent use of an atmospheric image formation model for underwater images and proposed a physically accurate model. The revised model showed that the attenuation coefficient of the signal is not uniform across the scene but depends on object range and reflectance. They also showed that the coefficient governing the increase in backscatter with distance differs from the signal attenuation coefficient.

In a paper, called 'Sea-thru: A Method For Removing Water From Underwater Images', they present the first method that recovers colour with a revised model using RGBD images. The Sea-thru method estimates backscatter using the dark pixels and their known range of information. Then, it uses an estimate of the spatially-varying illuminant to obtain the range-dependent attenuation coefficient.

The imaging available to underwater photographers doesn’t lend itself to powerful computing, and it wasn’t advancing the use of artificial intelligence and machine learning for the greatest benefit to scientists who often work with large data sets. So Akkaynak, who is now working at Florida Atlantic University (US), spent four years developing a new algorithm for processing marine images.

Coral Reef Looks As If It Were a Rock Formation

Sea-thru basically removes the water. A coral reef looks as if it were a rock formation on land and its hues are more true, which is a benefit when assessing the health of the specimen. Sea-thru also makes it easy to see fish and other species that are living in and near the coral, which has historically been a labour-intensive process because humans do it manually.

Using more than 1,100 images from two optically different water bodies, which the researchers have made publicly available, they show that their method with the revised model outperforms those using the atmospheric model. Consistent removal of water will open up large underwater data sets to powerful computer vision and machine learning algorithms, creating exciting opportunities for the future of underwater exploration and conservation.

Details and examples can be found on www.deryaakkaynak.com/sea-thru.