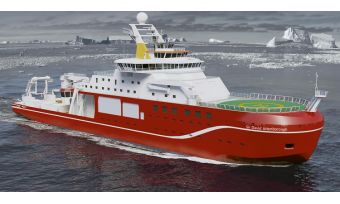 NERC's new GBP200 million polar research ship is to be named after world-renowned naturalist and broadcaster Sir David Attenborough. Following a call for suggestions that sparked global interest, Royal Research Ship Sir David Attenborough has been selected as a name that captures the ship's scientific mission and celebrates the broadcaster's contribution to natural science.

The name was revealed by the UK's Science Minister Jo Johnson, who also announced that the government will be investing up to GBP1 million in a new Polar Explorer programme to engage young people and inspire the scientists, engineers and explorers of the future.

The decision to name the ship after Sir David Attenborough comes only days before Sir David's 90th birthday and is in recognition of his legacy in British broadcasting, inspiring a love of the natural world over generations. In a career spanning six decades, Sir David has presented critically acclaimed wildlife documentaries on the BBC including The Blue Planet, Planet Earth and Frozen Planet.

Reflecting the global interest that the campaign drew, Science Minister Jo Johnson has also confirmed that the popular suggestion Boaty McBoatface will live on as the name of one of the high-tech remotely operated sub-sea vehicles. The 'Boaty' sub-sea vehicle will be dispatched from RRS Sir David Attenborough to allow the ship's research crew to collect data and samples from the deepest waters of the Arctic and Antarctic.

According to NERC chief executive Duncan Wingham, the NERC Name Our Ship campaign has engaged the public with the ship's mission on a huge scale and NERC are very grateful for the support and enthusiasm shown by the public in contributing to naming for the new research vessel the RSS Sir David Attenborough. The new Polar Explorer programme will continue to inspire future generations in this important area of environmental science. NERC are very happy to recognise the overall popular choice through naming one of the ship's robotic vehicles Boaty McBoatface.

Universities & Science Minister Jo Johnson said that the vessel will carry the Attenborough name for decades to come, as it fulfils its mission to explore the oceans and put Britain at the forefront of efforts to preserve our precious marine environment. The ship has captured the imaginations of millions, which is why the 'Boaty' name has been given to the sub-sea vehicle that will support the research crew and the polar science education programme that will bring their work to life.

Sir David Attenborough expressed to be honoured by this naming decision and said he hopes that everyone who suggested a name will feel just as inspired to follow the ship's progress as it explores the polar regions. He commented: “I have been privileged to explore the world's deepest oceans alongside amazing teams of researchers, and with this new polar research ship they will be able to go further and discover more than ever before."

The GBP200 million ship, being built in the UK on Merseyside, is due to set sail in 2019. She will provide the UK with the most advanced floating research fleet in the world, conducting vital research into the world's oceans and how we address climate change. As the biggest commercial shipbuilding contract in Britain, the construction of RRS Sir David Attenborough is supporting 400 jobs and 60 apprenticeships.