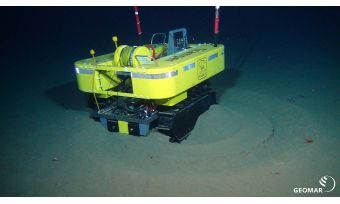 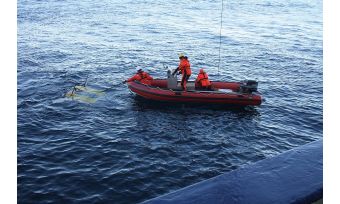 On 27 August 2017, deep-sea researchers from AWI successfully recovered the underwater robot 'Tramper', which had been taking measurements at a depth of 2,435 metres for nearly 60 weeks – the first long-term mission involving a crawler under the Arctic sea ice. For the first 24 weeks, the robot took biogeochemical readings at various sites. 'Tramper' became stuck in the same place in January because of a broken tread, but it continued to record the oxygen content in the sediment.

It was an exciting weekend on board the research icebreaker Polarstern: the deep-sea and aerospace researchers from the Helmholtz Alliance ROBEX entered the Fram Strait on a nearly direct course from the Norwegian port of Tromsø. On Friday, 25 August they then launched the remote-controlled underwater vehicle ROV Kiel 6000, supplied by the GEOMAR Helmholtz Centre for Ocean Research in Kiel, at the same location they had deployed Tramper on 11 July 2016.

Searching from Tramper’s starting point, the researchers found the exact place where it was launched. A live feed from the ROV’s cameras was set up in the ship’s winch control room. The expedition team was able to watch in real-time how the ROV followed Tramper’s tracks. One of its caterpillar treads had however broken down, as a result of which Tramper spent the second half of its mission time turning in circles.

Once Tramper had been found, the researchers and engineers had to have a bit of patience before it could be brought to the surface. The robot can only be retrieved with the help of an inflatable boat – but, given the high winds (five to six on the Beaufort scale) and two-metre waves, this was only feasible two days after initial contact. Once the seas had calmed, the recovery could finally begin. The researchers transmitted a signal to Tramper, which released its ballast as planned and began rising to the surface, taking two hours to ascend the 2,435 metres. The expedition team then retrieved it with an inflatable boat and hauled it on deck with a crane.

An assessment of the data and a closer visual inspection confirmed that the measuring and recording systems (camera and sensors) had worked perfectly. All of the programmed cycles worked as they were meant to – for the second half of the mission, only in one spot over and over. Because of the broken tread, for weeks Tramper dug itself deeper and deeper into the seafloor. As a result, the robot covered a total distance of roughly 360 metres. The first 24 weeks show some exciting data that the AWI researchers now begin carefully analysing. And that means they now know more about variations in oxygen consumption on the Arctic seafloor over half a year (July to December). The robot’s designers were amazed to see how much battery charge it still had – an aspect they had been somewhat concerned about. Since Tramper used up only half its charge, it could have kept going for almost another full year. Battery performance at 0.8 degrees below zero is difficult to predict, making this a welcome surprise.

The expedition team will attempt to repair the caterpillar tread. If they succeed, they’ll replace the crawler’s batteries and sensors and redeploy it, so it can gather data for an entire year-long cycle as planned.

The next highlights of the expedition will include tests of the GEOMAR underwater crawler Viator and an underwater glider developed at the University of Bremen’s MARUM (Centre for Marine Environmental Sciences) in the context of the Helmholtz Alliance ROBEX.

Expedition to the Depths Of the Ocean is About to Start