What is the Impact of Submarine Volcanoes on Biological Activity at the Ocean Surface? - 30/10/2019 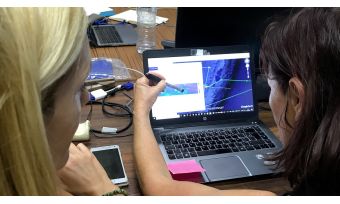 An international team of 29 researchers will plough through Pacific waters between Nouméa and the Tonga volcanic arc from 1 November to 5 December 2019 aboard l'Atalante, an oceanographic research vessel. The aim of this campaign, dubbed the TONGA Project, is to study the effects that shallow submarine volcanoes have on marine life.

Coordinated by two women researchers from the Oceanographic Laboratory of the Institut de la Mer de Villefranche (CNRS / Sorbonne University) and the Mediterranean Institute of Oceanography (CNRS / IRD / Aix-Marseille University / University of Toulon), the TONGA Project brings together nearly a hundred scientists from 14 French laboratories in mainland France and New Caledonia and from six international universities—in Australia, Germany, Great Britain, Israel, the UAE, and the US.

Nouméa and the Tonga Volcanic Arc

Onboard l’Atalante, which belongs to the French oceanographic research fleet operated by IFREMER, 29 researchers will navigate the waters between Nouméa and the Tonga volcanic arc for five weeks. Their goals are to study closely how fluids released by submarine volcanoes, rich in trace elements that can be life-sustaining or toxic, affect the microalgae living in the oceanic surface waters and the ocean’s capacity for sequestration of atmospheric CO2.

After having located one or more shallow active volcanoes, the team hopes to clarify the role that the fluids they release play in the enrichment of the Pacific Ocean with iron, a micronutrient essential to life. Such enrichment might explain the microalgal blooms observed during the summer in the southern hemisphere, between Australia and the Tonga volcanic arc.

To achieve their goals, the team will be relying on experts in the geochemistry of hydrothermal sources, trace element chemistry, physical oceanography, and biology. By using satellite imagery, automated sensors, in situ robots, and models, the scientists will be able to measure physical, chemical, and biological variables in real-time at different points—from within marine sediments all the way up to the atmosphere.

Experiments will also be conducted aboard l’Atalante to observe the fertilising or toxic effects hydrothermal fluids have on surface plankton. And for the first time in this region, additional instruments fastened to a mooring for one year will be monitoring the ocean’s capacity to biologically sequester CO2.

Scientists are not the only ones involved in the TONGA Project: the associated Adopt a Float educational programme will involve primary, middle, and high school students, including those attending a school in Nouméa. The students will help collect data and track robots used to determine biogeochemical profiles.