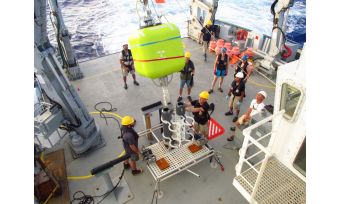 Schmidt Ocean Institute has come together with The Nippon Foundation-GEBCO Seabed 2030 Project for the joint signing of a Memorandum of Understanding to share all of its collected mapping data with the project. According to the Seabed 2030 Project, about 32 million square kilometres or 15% of the ocean has been mapped. The million square kilometre milestone is a big one for Schmidt Ocean, accounting for 3% of this mapping contribution and the discovery of 14 new underwater features.

Schmidt Ocean Institute is one of more than 100 organizations to formally support the initiative. Seabed 2030 is a global initiative aimed at creating a detailed, freely available map of the entire ocean floor by the year 2030. GEBCO (General Bathymetric Chart of the Oceans) is the only organization with a mandate to map the ocean floor.

The organizations are working together to achieve high-resolution mapping that is needed in ocean science. In fact, Seabed 2030 is working closely with the recently announced United Nations Decade of Ocean Science initiative that will begin in 2021. “While mapping the entire ocean floor by 2030 seems like a daunting task, we are making headway thanks to the commitment of commercial, scientific and private vessels, including Schmidt Ocean Institute’s R/V Falkor,” said Seabed 2030 Director Jamie McMichael-Phillips.

Schmidt Ocean Institute brings value due to its focus on mapping remote regions that require high-resolution seafloor imagery to contribute to an expansion or additional protections. Some of its large mapping efforts have focused on the Papahanaumokuakea Marine National Monument in Hawaii, Cocos Island National Park in Costa Rica, and the Phoenix Islands Protected Area in Kiribati.

R/V Falkor has hit a major milestone, mapping more than a million square kilometres of ocean floor and simultaneously making a commitment to The Nippon Foundation-GEBCO Seabed 2030 Project. Seabed 2030 is a global programme aimed at creating a super-detailed map of the entire ocean floor by the year 2030. Schmidt Ocean Institute has focused its mapping on remote regions that require high-resolution seafloor imagery to contribute to expansion or additional protections. Some of their large mapping efforts have focused on the Papahanaumokuakea Marine National Monument in Hawaii, Cocos Island National Park in Costa Rica, and the Phoenix Islands Protected Area in Kiribati.

Bottom of the Ocean

“Most people don’t think about the bottom of the ocean. When you look at a map, the ocean is portrayed as flat blue with very few features,” said Schmidt Ocean Institute co-founder Wendy Schmidt. “However, this couldn’t be further from what the ocean floor looks like. Picture huge mountains and canyons, exotic hydrothermal vent forests and unique conditions that mimic other planets. There are still so many things we do not know about the topography or the ecosystems that cover the largest part of our earth.”

Gaining visuals of the ocean floor is critical to unlocking a better understanding of the world’s oceans. There are predicted to be millions of unknown species whose function and contribution to ocean and human health are still unknown. High resolution maps guide scientists to these unexplored areas where further study and sampling can take place. “A high-resolution map of our seafloor will be an invaluable tool in protecting our oceans,” says Schmidt.

“What is important is that these maps are open-source and available to anyone from any country,” said Schmidt Ocean Operations Director Eric King. “This effort can only be achieved through cooperation and collaboration. Everyone who travels, explores, or uses our oceans has a role to play and can benefit from this initiative.”

Schmidt Ocean Institute will provide mapping data, but it has also set up dedicated mapping expeditions like “Mapping the Gaps” with its own research vessel Falkor, to help fill in the holes in previously collected mapping data. “Our organization is happy to see our data be a part of this collective initiative,” says King. “I look forward to a day when we can see an image of a fully mapped ocean.”

Salem Masry, an Icon in the Hydrographic World, Has Died
Latest news