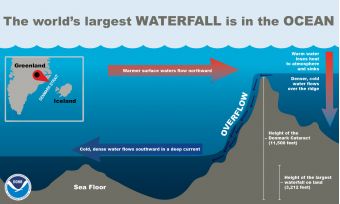 This infographic illustrates how a large underwater cataract (waterfall) naturally forms underneath the waves within the Denmark Strait. A map in the upper right of the graphic shows the location of Denmark Strait, between Greenland and Iceland. Warmer surface waters flow northward. These warmer waters gradually lose heat to the atmosphere and sink. Denser, cold water flows southward in a deep current along the seafloor over an undersea ridge in the Strait. The height of the Denmark Strait cataract is approximately 11,500 feet. By comparison, the largest waterfall on land is 3,212 feet.

Waterfalls Beneath the Ocean

Rivers flowing over the Earth’s gorges create waterfalls that are natural wonders, drawing millions of visitors to their breathtaking beauty, grandeur, and power. But no waterfall is larger or more powerful than those that lie beneath the ocean, cascading over immense cataracts hidden from our view.

Indeed, the world’s largest waterfall lies beneath the Denmark Strait, which separates Iceland and Greenland. At the bottom of the strait are a series of cataracts that begin 2,000 feet under the strait’s surface and plunge to a depth of 10,000 feet at the southern tip of Greenland—nearly a two-mile drop.

But how can there be waterfalls in the ocean? It’s because cold water is denser than warm water, and in the Denmark Strait, southward-flowing frigid water from the Nordic Seas meets warmer water from the Irminger Sea. The cold, dense water quickly sinks below the warmer water and flows over the huge drop in the ocean floor, creating a downward flow estimated at well over 123 million cubic feet per second. Because it flows beneath the ocean surface, however, the massive turbulence of the Denmark Strait goes completely undetected without the aid of scientific instruments.

The world’s oceans move in what is called the Meridional Overturning Circulation, more commonly called the global conveyor belt. The conveyor belt circles the globe, transporting heat and water and helping to stabilize global climate. It is also a vital component of the global ocean nutrient and carbon dioxide cycles. Warm surface waters are depleted of nutrients and carbon dioxide, but are re-enriched as they travel through the belt of colder, nutrient-rich water in deeper and bottom layers. The ocean’s food chain depends on this mixture, which supports the growth of phytoplankton, seaweed, and life itself.